Shanghai Plans to Roll Out 5,000 Hydrogen-Powered Vehicles Within Four Years 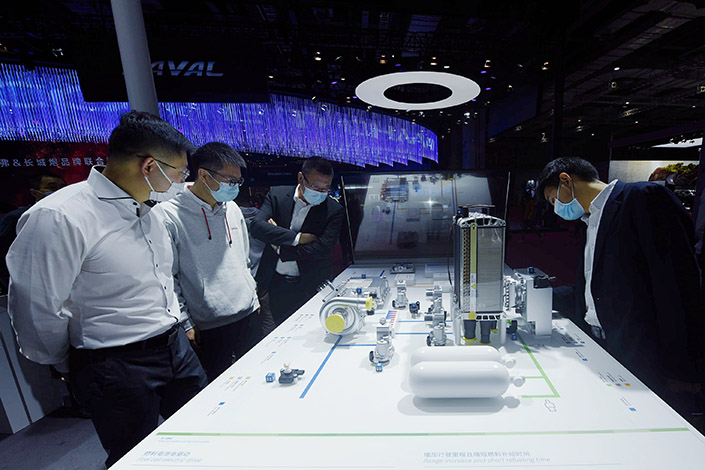 Shanghai plans to roll out 5,000 hydrogen fuel-cell vehicles within four years in collaboration with a cluster of nearby cities, a local official said Wednesday, as it awaits central government approval under an incentive program.

The plan involves the support of seven cities to develop a hydrogen fuel-cell industry chain, with two cities focused on research into key fuel-cell components and four focused on identifying where to use the vehicles, said Chen Kele, a Shanghai Municipal Commission of Economy and Informatization official, at the 6th International Hydrogen Fuel-Cell Vehicle Congress held in the metropolis.

The proposed 5,000 vehicles include 3,400 trucks, 1,400 passenger vehicles and 200 coaches, and they’ll be used in a variety of circumstances, Chen said. For example, there are thousands of trucks transporting steel at Baoshan Iron & Steel Co. Ltd.’s (600019.SH) Baoshan center, and Shanghai plans to replace 200 of them with hydrogen fuel-cell trucks, he said.

The plan shows how China is supporting cutting-edge applications of new energy sources, firstly through subsidies and then with a bonus program as it strives to reduce dependence on fossil fuels to meet its net-zero emissions target by 2060.

China has offered subsidies to manufacturers and buyers of hydrogen fuel-cell vehicles as well as other kinds of new-energy vehicles over the past few years, but the government proposed winding down the subsidy for the purchase of hydrogen fuel-cell vehicles last year as it shifted focus to supporting research on fundamental technologies and applications. At the same time, it decided to launch a four-year program (link in Chinese) to support local governments to research the technology and develop an industry chain.

The program allows the local governments to form collaborative groups and submit their plans to develop the appropriate technology and industry chain and it would subsequently approve some city groups’ proposals. Those which meet the targets listed in the plan will be awarded as much as 1.7 billion yuan ($265.9 million) as a fiscal bonus, according to the program.

Five city groups have passed the initial assessments, although the central government has not published the names of cities engaged in the program, industry participants told Caixin.

The city groups include those led by Shanghai, the Beijing-Tianjin-Hebei city cluster, and those in Guangdong and Henan provinces, the sources said.

Some relatively rich regions such as Shandong and Jiangsu provinces, though not included in the program, will not neglect the opportunities of hydrogen power and they may also launch their own hydrogen fuel-cell vehicle projects, Xu Zichun, director of a hydrogen fuel-cell technology research institute, told Caixin on Wednesday.