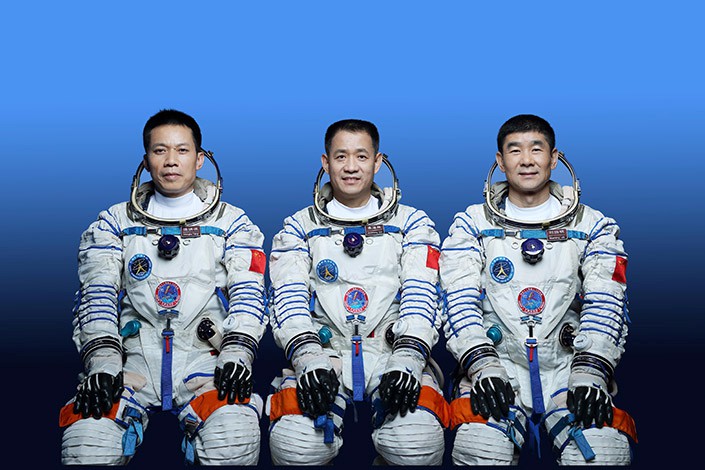 The spacecraft is scheduled to blast off at 9:22 a.m. from the Jiuquan Satellite Launch Center in North China’s Inner Mongolia autonomous region, said Ji Qiming, assistant to the director of the CMSEO.

The Shenzhou-12 will take the three men, Nie Haisheng, Liu Boming and Tang Hongbo, to its Tiangong space station, Ji said at the press conference. Nie, who has participated in the crewed Shenzhou-6 and Shenzhou-10 missions, will serve as the commander of this mission. “All systems for the Shenzhou-12 mission have been comprehensively tested.” Ji said. “The flight crew is in good shape, and all preparations have been made before launch.”

The launch is for the first crewed mission for the construction of China’s new space station, which it plans to finish within two years, Caixin has previously reported. Based on the plan, 11 “closely-related” missions will be carried out this year and next, Ji said. Among them, four will be manned launches. Four will be to launch cargo spacecraft, and three others will be to send space station modules into orbit.

So far, the country has launched the space station’s core module Tianhe and the Tianzhou-2 cargo spacecraft into orbit to help with the construction.

After entering orbit, Shenzhou-12 will rendezvous with the space station’s core module, and eventually combine with Tianhe and the Tianzhou-2, Ji said.

The astronauts will stay in the core module for about three months to carry out their tasks, which include extravehicular maintenance and replacing equipment, before taking a return capsule back down to Earth, where they will land at the Dongfeng landing site in Inner Mongolia, he said. “Currently, the combination of Tianhe and Tianzhou-2 is stable, and all the equipment is working normally,” Ji said.

The backup astronauts for the mission are Zhai Zhigang, Wang Yaping and Ye Guangfu. Wang, who participated in the Shenzhou-10 mission, was China’s second female astronaut to go into space, following Liu Yang.