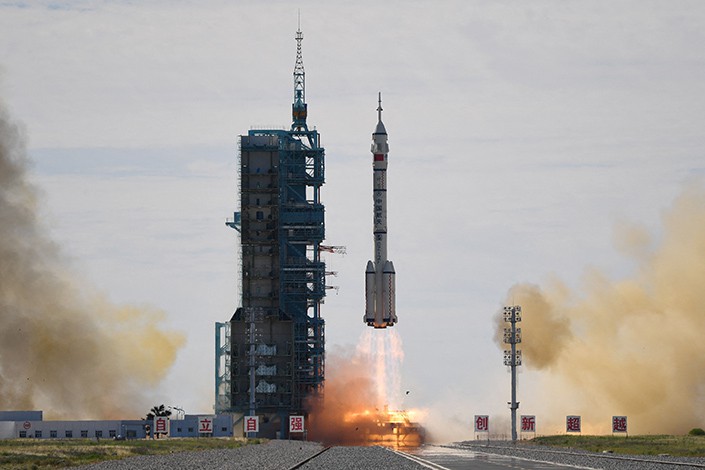 The three astronauts, Nie Haisheng, Liu Boming and Tang Hongbo, will be the first crew of the Tiangong space station. They will board the space station’s core module, called Tianhe, and spend three months living and working there, the longest stay in space by Chinese astronauts. The previous longest mission, Shenzhou-11, lasted 33 days in 2016.

China aims to complete construction of its first space station within two years, with 11 missions scheduled to be carried out this year and next, Caixin has previously reported. Before the launch of the Shenzhou-12 spacecraft, the country had sent its Tianhe core module and the Tianzhou-2 cargo spacecraft into orbit, with the latter bringing 6.8 tons of supplies, including propellants and food.

About 10 minutes after liftoff, the spacecraft entered its designated orbit, where it flew about six and half hours and rendezvoused with the Tianhe core module at 3:54 p.m., Xinhua reported. As Tianzhou-2 had previously docked with Tianhe, the three formed a combination, the report said.

Pang Zhihao, a researcher at the China Academy of Space Technology, told Caixin that the Shenzhou-12 mission will be a test for the astronauts as they need to complete a lot of tasks. “They need to learn new technologies such as operating robotic arms and spacewalking,” Pang said. “There are also physical and mental tasks, (and the astronauts’ performance) will lay a foundation for the flight crew later.”

Caixin has learned the astronauts will undertake tasks including extravehicular maintenance and replacing equipment during their three-month stay in the Tianhe core module.

Nie, commander of the Shenzhou-12 mission, said the mission has some features — such as long in-orbit duration, difficult operation and new technologies —which make the tasks more challenging.

“For example, as soon as the astronauts are stationed in the core module, they will start to take out cargo packages, disassemble and install equipment and set up their working and living environment,” Nie said. “They also need to perform extravehicular activities such as the testing and maintenance of spacesuits.”

“Moreover, the long-term flight increases the possibility of emergency incidents, which puts high demands on astronauts’ handling ability and overall quality,” he said.

This was echoed by Huang Zhicheng, a researcher from the Beijing-based Yuan Wang military science and technology think tank. Huang told Caixin that the long-term operation of the space station will rely on astronauts carrying out “a large number of complex extravehicular activities.”

“The requirements for astronauts to be able to get out of the core module will be higher, and the extravehicular capacity will be an important technical support to ensure the smooth completion and operation of the space station,” Huang said.