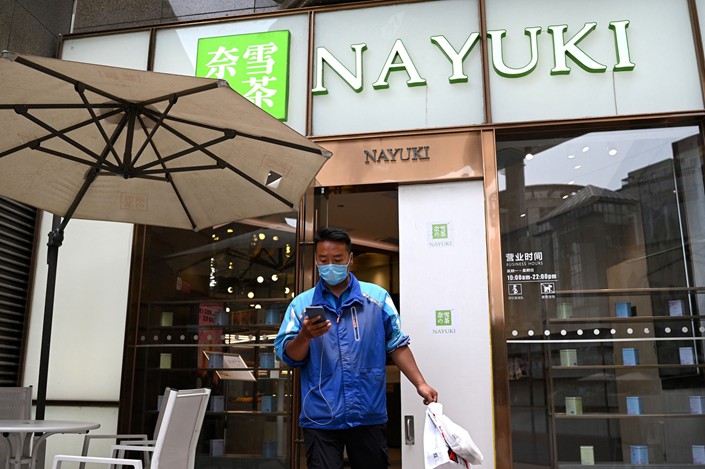 (Bloomberg) — Chinese bubble tea chain Nayuki Holdings Ltd. has raised HK$5.09 billion ($656 million) after pricing its Hong Kong initial public offering at the top of a marketed range, the latest company to ride a resurgence of listings in the Asian financial hub.

Nayuki, whose popular fresh-fruit teas include cheese-foam-topped beverages, has priced 257.3 million shares at HK$19.8 each, according to terms of the deal obtained by Bloomberg News. It had marketed the shares at HK$17.2 to HK$19.8 apiece.

The teahouse operator is testing the waters after Angelalign Technology Inc., a maker of clear orthodontic braces, heralded a revival in Hong Kong’s IPO market with a massive 132% pop on its June 16 debut, becoming one of this year’s most popular offerings in the city.

First-time share sales in Hong Kong are ticking up after a period of muted activity, as an easing of the global tech selloff has created a more favorable backdrop for debuts. At least 13 companies are currently in the lineup to go public, compared to only two deals priced in April and four in May, according to data compiled by Bloomberg.

Still, not every IPO is getting a warm welcome as investors have become more selective amid higher volatility in markets and growing expectations of a tightening of U.S. monetary policy. China Youran Dairy Group Ltd. and CARsgen Therapeutics Holdings Ltd. slumped 12% and 9%, respectively, in their trading debuts last Friday.

The top-of-the-range pricing values the bubble tea chain at about $4.38 billion, up from the $2 billion in its last funding round. It originally planned to file for an IPO in the U.S. in February last year, Bloomberg News reported, but eventually opted for Hong Kong.

The Shenzhen-based firm sells fresh-fruit teas, cold-brew beverages and baked goods. It recorded losses of 203 million yuan in 2020 and 40 million yuan in the previous year, according to its prospectus. Revenue rose 22% year-on-year to 3.1 billion yuan.

Nayuki plans to use proceeds from the offering to expand its teahouse network, deepen market penetration and strengthen its supply chain. It had 491 flagship Nayuki outlets at the end of last year, including 489 in the Chinese mainland, one in Hong Kong and one in Japan.