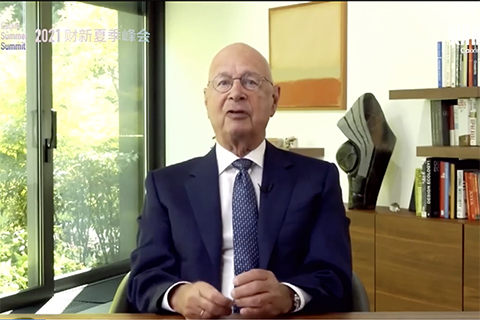 The impact of the Covid-19 pandemic and the world’s high level of interconnectedness make now the right time to explore a new approach to business that could combine progress, people and society, said Klaus Schwab, founder and executive chairman of World Economic Forum.

The new approach would be a stakeholder model in which companies would seek the long-term wellbeing of people by taking into account the needs of all stakeholders and society at large, rather than focusing exclusively on short-term profits, Schwab said in a virtual interview at the Caixin Summer Summit.

“In the modern world, the competitiveness of companies depends on the ability to attract talent and to fulfill the expectations of clients, who are increasingly expecting a company not to damage the planet or mistreat people,” Schwab said.

A Germany economist, Schwab first discussed the stakeholder concept in his 1971 book “Modern Company Management in Mechanical Engineering” and introduced the topic to China in 1979 on his first visit to the country. This approach was adopted in the post-World War II era in much of the West when it became clear that one person or entity could do well only if the whole community and economy functioned.

“After the destruction of World War II, there was a great sense of solidarity,” he said. Governments, businesses and society reached an agreement that the economy had to be rebuilt, businesses had to invest in plants, employees knew they had to work hard to contribute to the success of the firms, and governments needed to build strong social protection, he said.

This consensus collapsed since the 1970s after the global economy was rebuilt, economic inequality rose, a new conception of economics emphasized profits, and governments faced growing social challenges, Schwab said. That’s why he wrote a new book — “Stakeholder Capitalism: A Global Economy That Works for Progress, People and Planet” — to “set up a sign against too much concentration on just profits,” he said.

The pandemic was just one reminder of global interconnectedness and that no one is safe and well until everyone is, he said.

“When you talk about the stakeholder concept, it means to have everybody at the table,” Schwab said, so that people are better informed and can provide insights to support the decisions that integrate all stakeholders. “It may take longer to make the decision,” he said. “But afterwards, the implementation will be much faster and more effective.”

The World Economic Forum has been pushing for a global solution for nonfinancial reporting, seeking to improve the ways that companies measure and demonstrate their contribution to a more prosperous and fulfilled society and a more sustainable relationship with the planet.

At the 2020 annual meeting of the World Economic Forum in Davos, Switzerland, 120 of the world’s largest companies said they supported efforts to develop a core set of “Stakeholder Capitalism Metrics” to align their reporting on performance against environmental, social and governance indicators and track their contributions.

“Companies have recognized today, driven by the pandemic, that the big issues cannot be solved by government alone, by business alone or by civil society alone,” Schwab said.

In the context of challenges facing Asian countries, Schwab said the state capitalism approach that dominates much of Asia poses three major risks: overreliance on a single stakeholder, corruption and bureaucracy, which may stifle entrepreneurship and innovative capacity.

“We should acknowledge that in those 42 years, China’s economic wellbeing of people, measured by GDP, has multiplied by 50 times,” he said. “Just imagine — the GDP is 50 times higher than when I came the first time to China. What great progress.” He said he expects that China’s economy will continue to grow.