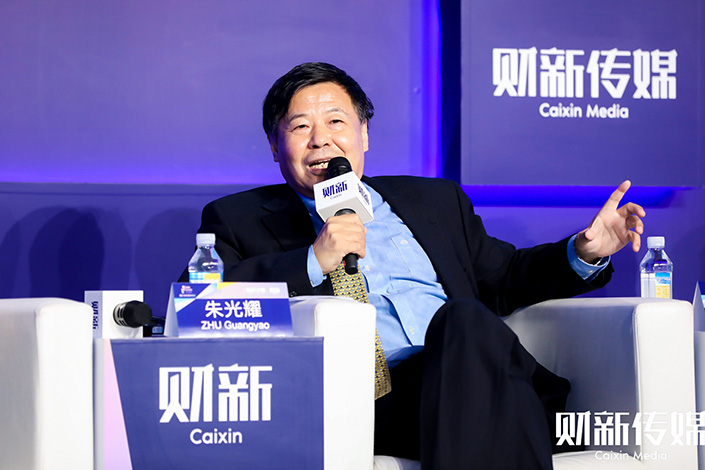 China will have to grow its GDP by about 5% annually on average from 2021 to 2025 to escape the middle-income trap, a former senior official said Thursday, as the country moves ahead with its 14th Five-Year Plan (FYP).

Former Vice Finance Minister Zhu Guangyao’s comments at the Caixin Summer Summit 2021 dovetail with policymakers’ goal of maintaining reasonable economic growth, even though the government has not proposed setting a numerical growth goal for the period and has vowed to achieve high-quality development.

During the latest FYP period, China plans to keep average annual growth in a reasonable range. The government has set a GDP growth target of “above 6%” for 2021, which analysts said leaves policymakers with more flexibility to boost quality economic growth and confront risks accumulating in the financial system.

The middle-income trap describes the development process in which a fast-growing developing economy finds its expansion slowing when it approaches a certain level of economic development.

President Xi Jinping said in a November explanation (link in Chinese) it is “completely possible” that China will reach the current standard for high-income countries by 2025 and double its total economic output or per capita income by 2035.

China’s gross national income (GNI) per capita in 2019 was about $10,410, defied as an upper-middle income economy by the World Bank and about $2,000 less than the standard for a high-income economy. Multiple analysts expect China to easily cross the gap by the end of 2025, compared with the longer-term and more challenging objective of becoming a medium-developed country in terms of per capita GDP by 2035.

After entering the ranks of high-income economies, China remains the largest developing country in the world, Zhu said. The 2035 goal means China’s per capita GDP will have to double to $20,000 by 2035, with an annual growth rate of around 3.7%, he said.