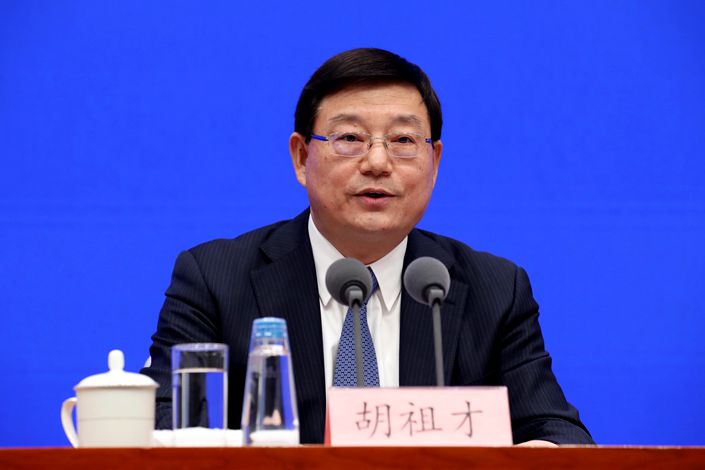 China has not abandoned GDP growth targets even though the government is not proposing to set a numerical growth goal in the five-year plan for 2021-2025, a senior official from the country’s top economic planning agency said Monday.

By omitting a numerical target, the authorities will have more flexibility to deal with new uncertainties and developments and be able to set goals based on each year’s specific situation and conditions, Hu Zucai, deputy head of the National Development and Reform Commission, said at a briefing (link in Chinese). Premier Li Keqiang told delegates to the annual meeting of the National People’s Congress on Friday that the government is proposing a GDP growth target of “above 6%” for 2021.

“China’s economy has turned to the stage of high-quality development, so we cannot simply pursue GDP growth, let alone ignore the quality of development or its environmental impact purely for the sake of growth,” Hu said. “But on the other hand, achieving modernization needs reasonable growth. China is still the largest developing country in the world, and development is still the basis for and key to solving all problems. The draft outline (of the 14th Five-Year Plan) effectively addresses both of these needs.”

Scrapping a numerical target in the five-year plan doesn’t mean the government doesn’t want GDP growth, Hu said. There are other quantified targets –– indicators like unemployment and carbon emissions that carry implications for the overall economic growth rate. The aim is to keep average annual growth in a “reasonable range” and to set a goal each year that is appropriate for the country’s economic situation at the time, he said, citing the draft outline of the plan.

Policymakers are aiming to keep the increase in annual GDP in line with the economy’s potential growth rate, Hu said, referring to a theoretical concept that measures how much an economy can grow every year, taking into consideration factors including employment, productivity and capital, without causing a rise in inflation.

The government work report presented to the delayed National People’s Congress in May 2020 didn’t set a GDP growth target for the first time in years as the country’s fight to stop the spread of the coronavirus blew a hole in the economy in the first quarter, and uncertainties stemming from the domestic and global fallout of the Covid-19 pandemic were too great. In the event, China’s GDP expanded by 2.3% in 2020, making it the only major economy to report growth for that year.

But the speculation ahead of the announcement rekindled a debate about whether China should abandon GDP growth targets and put more focus on other indicators such as employment and inflation goals.

That debate is still raging. On one side are experts including Ma Jun, a former economist with Deutsche Bank AG and the People’s Bank of China (PBOC), and now an academic and a member of the PBOC’s monetary policy committee. He has long urged the government to permanently scrap GDP growth goals and switch to employment and inflation as the main objectives of macroeconomic policy.

In a widely reported speech (link in Chinese) in January, he said that setting an official annual GDP growth target could put pressure on local governments to increase their already high debts in order to meet the goal. Emphasizing GDP as a tool for assessing local officials inevitably leads to the problem that some localities will falsify their economic growth numbers, Ma said.

On the other side of the debate are economists including Zhang Liqun and Feng Xuming, who say the economy needs the anchor of a GDP growth target.

Zhang, a researcher with the Development Research Center under the State Council, China’s cabinet, said (link in Chinese) in February that the government must set a goal this year because without it the economy doesn’t have a support for quality growth. Targets for the budget, bank credit growth, employment and income growth are all closely linked to how fast the economy expands, he said.

China should not abolish GDP growth targets until a more comprehensive and scientific system of indicators is set up, Feng, a researcher at the Chinese Academy of Social Sciences, said in an opinion piece (link in Chinese) in January. A growth target is so important for the country’s macroeconomic management that just abandoning it could lead to problems in coordination between government departments, he said. It could also lead some grassroots officials to the conclusion that economic growth is no longer important, which is wrong, he said.

One major reason why many provincial-level governments set cautious growth goals for 2021 was because they didn’t feel as much pressure in terms of being evaluated on meeting growth targets, Feng told Caixin in a recent interview. A study of provincial-level GDP growth targets for 2021 carried out by Caixin last month showed that the vast majority the Chinese mainland’s provincial-level governments set goals lower than projections from both the World Bank and the International Monetary Fund for expansion of around 8% for the country as a whole.