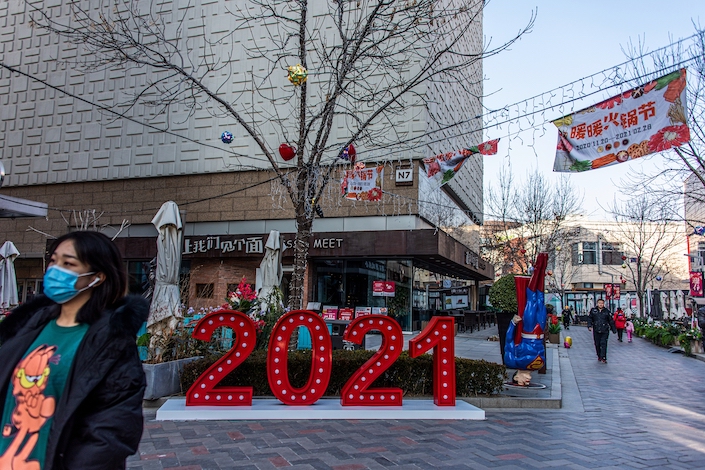 China’s modest 2021 economic growth goal of more than 6% leaves for upward revision and allows for policies to be adjusted at any time to avoid being too tight or too loose to meet a specific growth target, a leading economist said.

The target mainly reflects uncertainties in domestic and global pandemic control and overseas economic stimulus policies that make it “difficult to give a definite forecast,” said Wang Tao, the head of Asia economics and chief China economist at UBS Investment Bank.

UBS projected that China’s GDP growth would rebound to 8.2% in 2021. Now even that forecast seems on the conservative side, especially given the outlook for a large new fiscal stimulus package by the U.S., Wang said Monday at a special media conference on the annual meeting of the National People’s Congress (NPC).

Premier Li Keqiang disclosed the GDP goal Friday in the government work report to the NPC, China’s top legislature. The goal is well below market estimates ranging from 8% to 10%. China’s GDP grew 2.3% in 2020, the lowest since 1976, but the country was still the only major economy to expand amid the pandemic.

“In setting this target, we have taken into account the recovery of economic activity,” Li said in the report. The goal will help promote reform, innovation, and high-quality development, he said.

Although the economic growth target is conservative, the macro policy tone is not as tight as expected, Wang said. In terms of fiscal policy, the deficit-to-GDP ratio is set at around 3.2%, and the quota for new local government special-purpose bonds in 2021 is 3.65 trillion yuan ($559 billion), just 100 billion less than the 2020 figure, both exceeding market expectations.

Meanwhile, the government work report explicitly extended the period for implementing certain temporary tax and fee cuts and pledged to introduce new structural tax cuts for small and medium-sized enterprises. Such reductions include raising the value-added tax threshold for certain taxpayers by 50%, and in addition to preferential policies already in force, halving income tax payments by micro and small businesses and the self-employed on annual taxable income of less than 1 million yuan.

Wang said the exit from stimulus policies is milder than expected and in line with other measures outlined in the government work report, “aiming to maintain policy support for the real economy and further boost employment and consumption.”

Monetary and credit policies will be gradually normalized, but the focus will shift to more risk prevention and leverage control after the economy recovers, Wang said.

Wang said she doesn’t expect the central bank to raise interest rates for some time, but she does expect it may raise the reverse repo operation rate and medium-term lending facility rate by 5 basis points, or 0.05 of a percentage point, by September and October. Credit growth will continue to fall, to 10.8% from the recent peak of 13.8% in October 2020, as government bond issuance and corporate credit demand fall as the economy improves, Wang said.

China’s economic growth in 2021 will be mainly driven by exports and domestic consumption, Wang projected. Thanks to a recovery in major economies such as the U.S. and Europe, UBS expects China’s 2021 exports to grow more than 10%. Consumption is expected to expand by 10% in 2021 in real terms partly thanks to a low base of comparison, the bank estimated.