By Xu Luyi and Cai Xuejiao 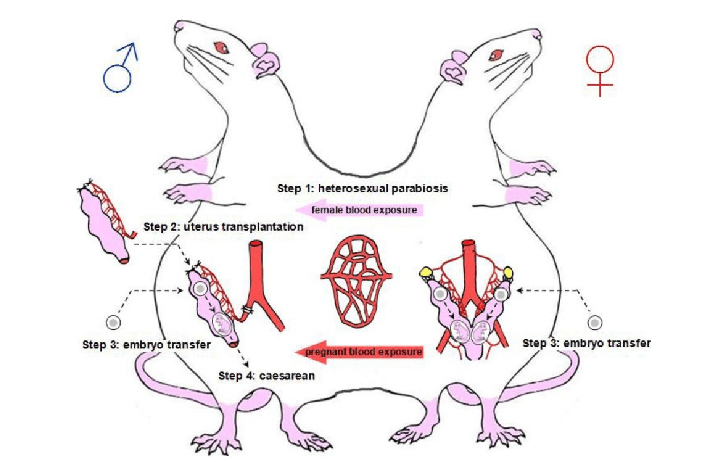 A diagram of a pregnant male rat from the study. Photo: bioRxiv

Chinese scientists who impregnated male rats have defended their research after the study stirred controversy over its necessity and ethics.

The scientists impregnated male rats and delivered 10 pups through caesarean section in the study, which has not been peer-reviewed, published on bioRvix website on June 16.

The paper is coauthored by Zhang Rongjia and Liu Yuhuan from the Shanghai-based Naval Medical University. According to the paper, the scientists conjoined castrated male and female rats, and transplanted uterus and embryos into the males, followed by caesarean sections.

Zhang, the corresponding author, said in responses posted on post-publication peer discussion site PubPeer that the experiment followed ethical principles and the team reduced the number of rats involved and the pain suffered by them as much as possible.

Zhang also clarified that the experiment has no connection with humans, responding to public discussions on the possibility of using the method on humans.

“Our experiments … indicate that male pregnancy in humans is not feasible at this stage. That’s because we found that only male parabionts exposed to pregnant blood have the possibility of pregnancy, and the success rate is very low. If our result is correct, this is almost a death sentence for human male pregnancy.”

“Our findings reveal the potential for rat embryonic development in male parabionts, and it may have a profound impact on reproductive biology research,” reads the paper.

A parabiont is an organism which has become anatomically attached to another in a state of parabiosis, often artificially as part of research.

The study has raised controversy, with researchers questioning the necessity of, and justification for the experiment, given the number of rats used and the low success rate.

The experiment used 163 pairs of rats, but only six pairs gave birth. The success rate of the experiment was 3.68%, the paper said.

In a recent post on PubPeer, Zhang said the team has applied for a retraction of the paper, saying “we really don't want to expand the unnecessary controversy.” However, she later wrote that the team had decided to stop the retraction, without elaborating.

“We don't know whether our retraction can be stopped, but to be honest, we did nothing wrong, just performed an animal experiment,” she wrote.

Researchers have questioned the utility of experiments using such highly artificial conditions, according to American magazine The Scientist.

Reza Ardehali, a cardiologist at the University of California, Los Angeles, told Caixin that using parabiosis in experiments on rats is difficult due to male rats’ aggressiveness, which might result in injuries or death of the animals.

Using parabiosis is a rather outdated method, which would usually not be approved by ethics review committees if there are better alternatives, he said.