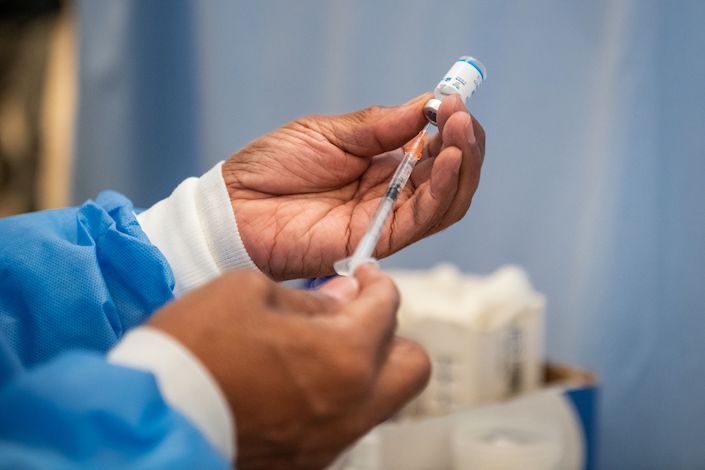 A healthcare worker prepares a dose of the Sinopharm Group Co. Covid-19 vaccine at the Alba Hotel in Caracas

(Bloomberg) — The campaign to roll out Covid-19 vaccines to the world is turning to China after supply shortages caused a glaring gap in access to life-saving doses.

Two Chinese developers, Sinovac Biotech Ltd. and Sinopharm Group, agreed to sell their shots to the Covax program, pledging millions of doses that will give the global distribution effort a much-needed boost. Covax, backed by groups including the World Health Organization, was set up last year to ensure equitable distribution of vaccines, but it has fallen short of initial targets.

Covax has shipped only about 102 million doses so far as part of a plan to deliver 1.8 billion by early 2022. The Chinese drugmakers will help bolster supplies immediately. Sinopharm agreed to provide 60 million doses from July through October, according to the vaccine alliance Gavi, which purchased the shot on behalf of Covax. Gavi has the option to acquire an additional 110 million doses later. Sinovac will supply as many as 380 million doses.

Many nations are counting on Covax after falling behind wealthier governments in the bid to vaccinate their populations. Moderna Inc. joined other drugmakers in supplying the initiative in May, offering to provide as many as 500 million doses of its shot. Only a small fraction of the shipments are due to arrive this year.

The Covax program is heavily reliant on AstraZeneca Plc’s two-dose vaccine but has been hamstrung by delays in shipments from the Serum Institute of India, a key manufacturer of those shots. India halted exports to tackle a devastating outbreak at home.

Both Sinovac and Sinopharm’s vaccines are based on an inactivated form of the coronavirus and were cleared for emergency use by the WHO earlier this year. They have already been widely distributed around the world after China struck bilateral deals, mostly with developing countries.

The efficacy of the Chinese shots ranges from 50% to almost 80% in trials and real-world studies, lower than the levels recorded by messenger RNA vaccines developed by Moderna and Pfizer Inc.-BioNTech SE. That has raised concern they may not be effective in taming the virus’s more infectious variants.

Some countries have offered a third dose, and others are open to mixing the Chinese vaccines with those from Pfizer and AstraZeneca as evidence emerges that such combinations could trigger a strong immune response.