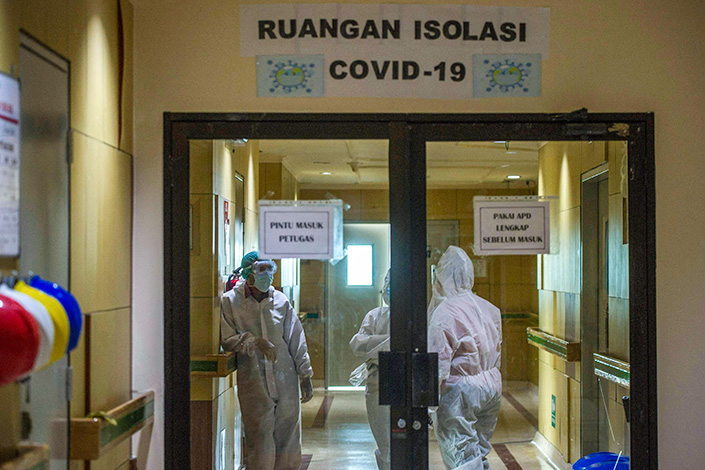 Amid a worsening Covid-19 crisis that is pushing its hospitals to near breaking point, Indonesia is rolling out stricter social distancing measures to curb the rise in new cases and seeking foreign assistance, including from China.

The Southeast Asian country confirmed a record 38,391 cases on Thursday. The day before, the official daily death toll surpassed 1,000 for the first time.

Hospital beds nationwide are 76% full, and the occupancy rate in the country’s capital of Jakarta has hit 93%.

Many nations in Southeast Asia are grappling with rising Covid-19 caseloads and deaths, in part due to a combination of lagging vaccination programs and more transmissible variants of the novel coronavirus.

In Jakarta, people are rushing to purchase oxygen tanks, driving the price of medical oxygen to double or even triple, up to IDR 2 million rupiah ($137) per tank. The average monthly salary in Indonesia last year was $169, according to data provider CEIC.

Oxygen shortages are already contributing to deaths. Over 60 Covid-19 patients died at Dr. Sardito General Hospital in the city of Yogyakarta after it ran out of oxygen over the weekend.

A Monday editorial in local daily Koran Tempo said the hospitals dealing with the Covid-19 crisis in Jakarta and some other big cities have “actually collapsed,” and called for President Joko Widodo to “raise the white flag” and ask for assistance from abroad.

Indonesia’s Coordinating Maritime Affairs and Investment Minister Luhut Binsar Pandjaitan revealed Tuesday that the country is sourcing emergency oxygen from Singapore and calling for help from other nations including China.

“We have communicated with Singapore, China and other sources,” Luhut was quoted as saying by AFP.

Around 10,000 oxygen concentrators are to be shipped from Singapore with some arriving by Hercules cargo plane.

So far, most of Indonesia’s Covid-19 vaccine imports have been purchased from China’s Sinovac Biotech, which is supplying the equivalent of 105 million doses. Japan has promised to donate 2.1 million AstraZeneca doses to Indonesia, 1 million of which arrived last Thursday.

The Indonesian government is attempting to speed up its vaccination program, which has so far fully vaccinated little more than 5.2% of its over 270 million population, according to Our World in Data. The Sinovac and AstraZeneca vaccines both require a course of two doses.

While the situation already appears grim, some worry that it is actually worse than official figures suggest.

“The number of cases and deaths are severely undercounted in Indonesia due to limited testing and deliberate underreporting by the regional authorities,” Septian Hartono, a volunteer at a local Covid-19 data initiative, KawalCovid19, told Caixin.

To prevent the current wave from becoming even bigger, he called for the national government to admit upfront that the country is indeed in crisis and the regional governments to change their mindsets so that as many cases as possible are detected by testing and tracing.

Both Java — with over 150 million residents — and the country’s top international tourist destination Bali are currently enforcing extra social distancing measures as infections spike. Until July 20, malls will be closed and dining in at eateries forbidden.