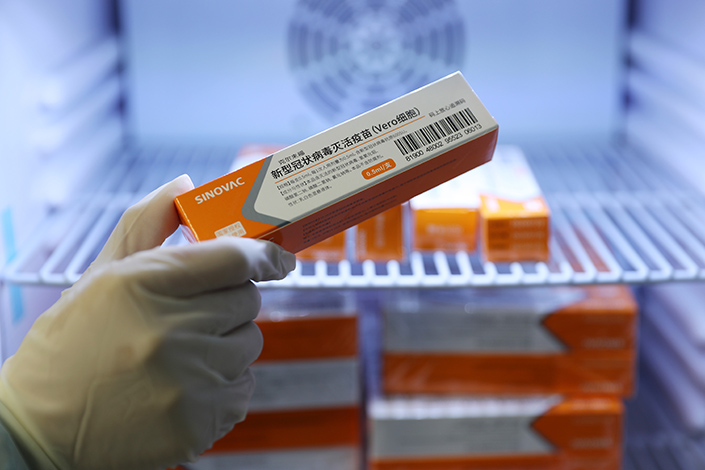 The trials involved more than 550 participants, of which only two — accounting for less than 1% of the total — experienced serious adverse reactions after vaccination. Photo: The Paper

The Covid-19 vaccine made by Chinese drugmaker Sinovac Biotech Ltd. has been found safe and effective for children as young as three, according to a study published in British medical journal The Lancet Infectious Diseases.

The results of clinical trials for CoronaVac, an inactivated virus vaccine developed by Sinovac, showed that minors aged between 3 and 17 produced an immune response against Covid-19 after receiving two doses, said the study, which was published on Monday.

The results appear to validate China’s authorization of Sinovac’s vaccine for emergency use on children as young as three last month, becoming the first major country to do so, after approving its use on adults in February.

China had administered more than 1.2 billion vaccine doses as of Thursday, according to the National Health Commission (link in Chinese). As most of China’s five approved vaccines, including for public and emergency use, require two doses, the country is still some distance from its goal to inoculate 80% of its population, or about 1.1 billion people, to reach herd immunity.

The Chinese mainland confirmed (link in Chinese) 18 Covid-19 cases on Thursday, all imported, bringing the total number to 91,810. The mainland’s death toll stood at 4,636.

The trials involved more than 550 participants, of which only two — accounting for less than 1% of the total — experienced serious adverse reactions after vaccination, according to the study.

“CoronaVac was well tolerated and safe, and induced humoral responses in children and adolescents aged 3–17 years,” Sinovac said when disclosing the results, which mark the first time that data on the safety and immunogenicity of a Covid-19 vaccine in minors was made public.

In early June, the World Health Organization approved CoronaVac for emergency use, making it the second Chinese-made Covid-19 vaccine given to people all over the world after the jab made by state-owned Sinopharm Group Co.

According to the study, a total of 552 participants aged 3-17 were involved in phase 1 and phase 2 clinical trials, which were conducted from October to December in Zanhuang county, North China’s Hebei province. Most received a two-dose regimen within 28 days.

A total of 146 participants reported at least one adverse reaction over the period, although most of the reactions were mild and moderate in severity. The most common reactions were pain at the injection site and fever, the study shows.

Only two of the participants had serious adverse reactions, the study shows, while only one serious adverse event of pneumonia was reported, which Sinovac said it was “unrelated to vaccination.”

The study found that children and adolescents had stronger immune responses compared to people over 18 years old after they received two shots of the medium-dose vaccine, one of the two kinds given to participants.

The trials excluded those who have previously been infected with the coronavirus or likely been exposed to it, Sinovac said.

A previous paper penned by Brazilian researchers showed that the vaccine is 50.7% effective at preventing symptomatic Covid-19 cases. Currently, 23.7% of the world’s population has received at least one dose of a Covid-19 vaccine, with more than 3 billion doses administered globally, according to Our World in Data.