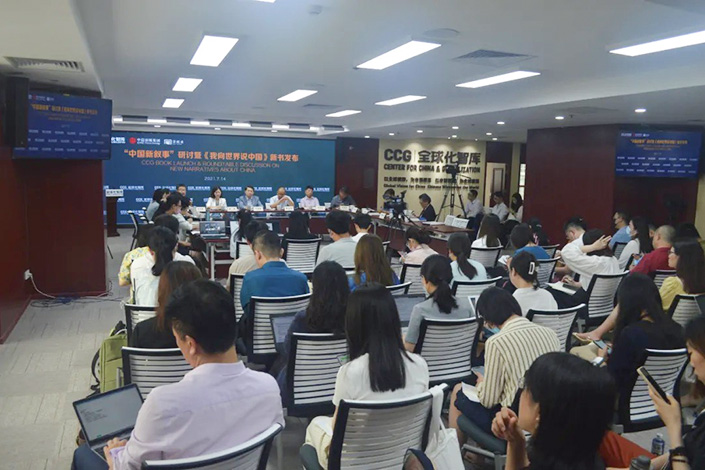 The global communication strategy of “telling China’s story well” should be improved and avoid falling into populism at home, experts told a Beijing think tank discussion.

Efforts to tell China’s story to foreign audiences and raise the country’s global influence still face problems, the experts warned at the Wednesday event held by the Center for China and Globalization (CCG). They said it is difficult for narratives catering to domestic audiences and online sentiments to resonate with others.

Chu Yin, a professor at the University of International Relations said the strategy of telling China’s story to the world should guard against being “internalized,” when messages from Chinese diplomats, experts and scholars appear to be delivered more to domestic rather than foreign publics, and have more influence at home than abroad.

“Such ‘internalization,’ combined with the internet era, has made the global communication efforts fall into populism,” Chu said. “Some experts and diplomats have lowered their professional standards to cater to online sentiment. This has led to bad results, making the idea of ‘telling China’s story well’ a hostage to domestic online sentiment.”

In recent years, Beijing has stressed the importance of raising China’s international influence and better telling China stories to the world. In late May, President Xi Jinping told (link in Chinese) a study session of the Politburo that China should be “open and confident, but also modest and humble” in communication with other countries.

Since last year, the purported “wolf warrior” diplomacy adopted by Chinese diplomats to more forcefully push back against external pressure has received mixed reactions from both home and abroad.

Shou Huisheng, a researcher at the Institute of Country and Regional Studies at Beijing Language and Culture University, also noted in the discussion that the current telling of China stories adopts a top-down approach, hindering effective dialogue with other countries.

He also said that it is a misconception to put emphasis on “Chinese characteristics” in global communication strategy. “Communication requires interaction. Placing emphasis on differences rather than commonality creates huge obstacles for exchanges,” he said.

“It is necessary to make friends, unite and win over the majority, and constantly expand the circle of friends as regards international public opinion,” he was quoted as saying in a report by the state-run Xinhua News Agency.