By Guo Yingzhe and Bai Yujie 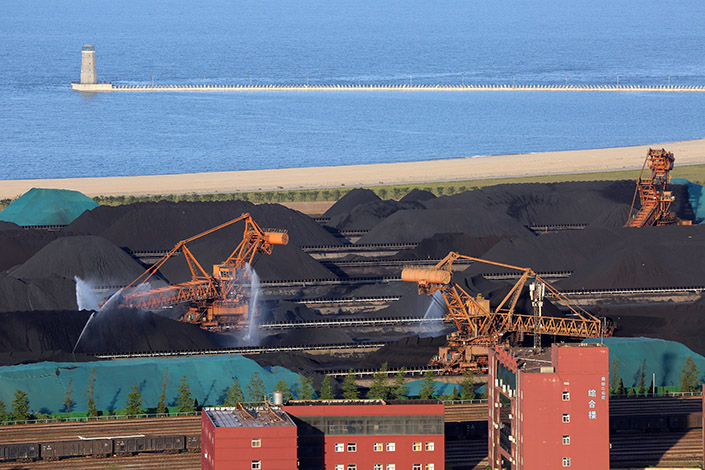 Beijing will release over 10 million tons of coal from the national reserves to boost tight supplies as the government struggles to balance ensuring enough power to the grid while transitioning away from high-carbon emitting fuels, which generate the bulk of the nation’s energy.

The coal will be “released onto the market at any time as needed” in order to stabilize supplies and prices, according to a Thursday statement (link in Chinese) from the National Development and Reform Commission (NDRC), the top economic planning agency.

The NDRC also said it plans to as much as double coal reserves (link in Chinese) to at least 200 million tons in the future, with the ultimate goal of having 600 million tons to draw on — the equivalent of 15% of annual demand — with companies holding 400 million tons, according to a separate statement issued Friday.

The move to release reserve coal illustrates the dilemma facing China’s government, which must meet rising electricity demand and maintain a stable power supply, while trying to cut dependence on coal power in order to achieve its goal of net-zero carbon emissions by 2060.

Coal remains the main fuel for China’s electricity generation and overall energy use, accounting for almost 60% of total energy. This resulted in China contributing almost 30% of total global emissions in 2019, according to a May report by the Rhodium Group, far surpassing the second highest emitter, the U.S., which contributed 11%.

Coal has been in short supply in some regions, pushing the China Coal Price Index, a broad measure of prices, up by 24.4% (link in Chinese) as of July 9 from the start of April. The country produced 320 million tons in raw coal last month, down 5% year-on-year, official data show (link in Chinese).

The NDRC said it has released a total of 5 million tons in reserve coal four separate times this year, with reserves standing at 100 million tons.

Indicative of tight supplies, the government in Central China’s Henan province has ordered mines not to sell coal used to produce electricity to other provinces, according to the Securities Times (link in Chinese), citing coal companies.

Electricity use has soared across China over the last two months due to the hot weather and the gathering pace of business activity as the economy recovers from the Covid-19 pandemic. Peak loads of power grids in the relatively wealthy provinces of Guangdong, Zhejiang and Jiangsu all hit records in July, according to statements from electric utility giant the State Grid Corp. Ltd. and provincial authorities.

In Xi’an, the largest northwestern city, the peak load hit all-time high (link in Chinese) for the sixth time this summer on Tuesday, leading to power outages and eliciting complaints from residents.

“We have already had three power cuts over the past few days,” Fei Mao, an owner of a homestay apartment in Xi’an told Caixin. “The guests are upset,” she said.

The rise in coal prices is partly due to high global prices, but also the nation’s move to shut down mines on safety concerns, as well as the goal to reduce dependence on coal-generated power, Qiu Chengqin, director of low-carbon energy policy research at Greenpeace, wrote in an opinion piece (link in Chinese) this week for Caixin.

In southwestern city of Chongqing, the local government has vowed to shut down 14 coal mines owned by Chongqing Energy Investment Group Co. Ltd. to phase out 11.5 million tons of annual “backwards and excessive” mining capacity by June.

Experts at the International Energy Agency (IEA) have recommended China shut down its least efficient, most polluting coal power plants, and refit the others to support growing renewable energy while maintaining electricity security. They also said China has to reduce coal plants’ emissions or it will fail in its energy transition.