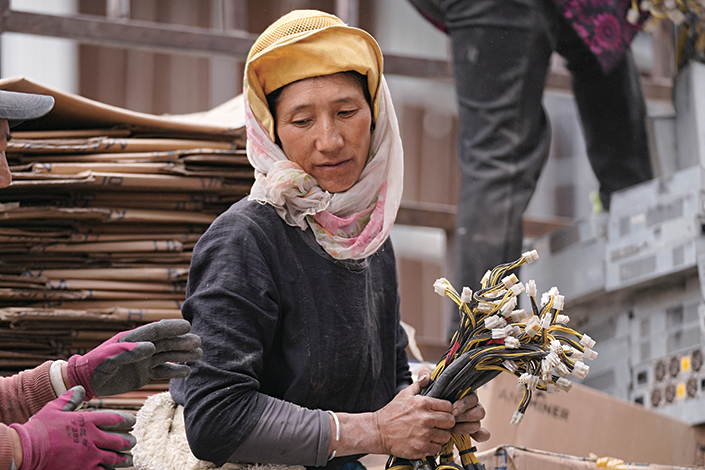 In March, I set foot inside a Bitcoin mining farm in Xinjiang for the first time. I recall the vast yellow desert stretching into the distance, the deafening rumble of thousands of high-powered computers solving math problems to verify crypto transactions and earn new units of Bitcoin, and the refreshing wafts of cool air generated by giant fans in the sweltering room. No one was around, except for two or three maintenance workers on duty.

In early May, a colleague and I joined one of the “migrations” of the mining machines from the far western region of Xinjiang to the Ngawa Tibetan and Qiang autonomous prefecture in Southwest China’s Sichuan province. The prefecture is in a mountainous area that allowed the owners of crypto mining operations to capitalize on its abundant supply of hydropower during the rainy season.

As we traveled further into the deep mountains of Sichuan in the weeklong journey, the roads got narrower and eventually turned into a winding trail of dirt and mud next to a coursing river. The drivers of the fleet of heavy trucks were undeterred, however, charging forward on the familiar route to reach their destination — the cluster of Bitcoin mining farms mushrooming next to an electric substation near the river.

We arrived right at the busiest time of the year. We saw the owners of crypto mining facilities scrambling to set up their machines and get them running as soon as possible, prompting the enlistment of local villagers as extra labor.

The groups of villagers, most of them ethnic Tibetans, arrived early in the morning on May 2 for their assignment — to unload the mining machines from the trucks, dust them off, and install them one by one inside the facility. As soon as the tarps covering the machines were removed, the men and women sprang to work immediately and began grabbing the machines and piling them into the hand-woven bamboo baskets that they carried on their backs.

One woman in particular caught my attention: She had her sleeves rolled up, a headscarf draped around her neck, and a bright blue wool coat wrapped around her waist. She bent down and picked up the components of the mining machines, arranging their power cords into a bouquet as she would have done with crops during a harvest. I hit the shutter button.

The other villagers worked quickly through the trucks. Almost none had the slightest idea what the machines were or what they were used for. Some of the workers thought the machines were power banks, sent to Sichuan for a “recharge” before being transported back to be sold in Xinjiang. Either way, they kept on going, smiling through the sweat and weight of the machines, and were just thankful for the 100 yuan ($15.40) to 200 yuan — in non-crypto money — they’d bring home that day.

These were some of most iconic moments leading up to the Chinese government’s announcement in May of a crackdown on Bitcoin mining, which subsequently led to a shutdown of cryptocurrency mining operations across the Xinjiang Uyghur and Inner Mongolia autonomous regions, as well as Sichuan, Qinghai and Yunnan provinces.

In Sichuan, dozens of cryptocurrency mining firms were closed down last month following a June 18 clean-up notice from local authorities.