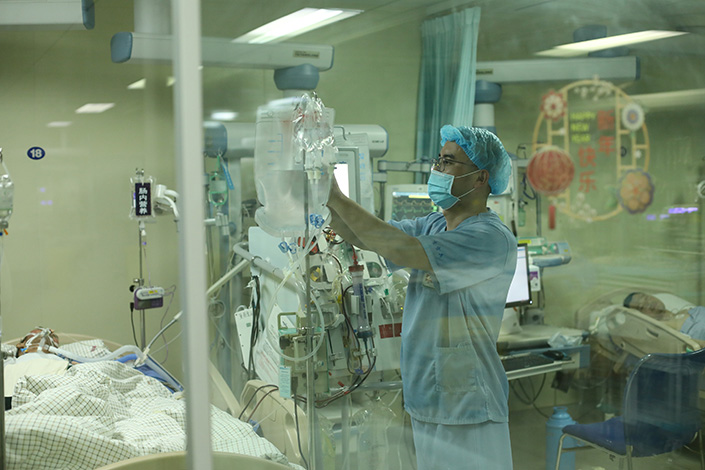 “It’s like being drained of all your energy.” This has been Yang Xi’s daily reality of living with myasthenia gravis (MG) for the past six years.

Yang is among the nearly 1 million Chinese MG patients suffering from symptoms such as muscle weakness that causes difficulties with speech, swallowing and breathing. The incidence of MG in China is about 0.68 per 100,000, making it officially a rare disease.

Due to its rarity, many patients find it hard to get treatment. Some rely on relatively effective innovative drugs. However, because MG isn’t covered by China’s national medical insurance scheme, these drugs are expensive. That means many have to turn to less effective, but more affordable drugs that have greater negative side effects, according to experts.

The National Health Commission (NHC) issued a list (link in Chinese) of 121 rare diseases in 2018, including generalized myasthenia gravis. For these 121 rare conditions, 21 drugs have been included in the national medical insurance program, said Sui Binyan, an NHC researcher.

That means coverage remains limited, Sui said, saying that some innovative drugs that have already been approved outside China are still waiting for domestic approval, and some that have been approved in China haven’t been included in the insurance program.

Also, while some innovative drugs widely thought to be effective as MG treatments have been added to the list, they’ve not been approved for MG patients, offering yet another hurdle to accessing the drugs at an affordable price, Liu Junshuai, vice president of the Beijing Rare Diseases Treatment and Support Society, said during a forum in early July.

According to a survey conducted by Liu, the cost of innovative drugs for MG patients is around 40,000 yuan ($6,166) per year, putting it well beyond the means of many Chinese, especially those living in less developed areas.

Currently, the innovative drugs eculizumab and rituximab are known to be effective at treating the disease, said Chang Ting, an associate professor of neurology at the Tangdu Hospital of Air Force Medical University.

Eculizumab hasn’t been included in the national health insurance scheme, and rituximab hasn’t been approved for MG patients. Both cost thousands of yuan per dose, Chang said.

Multiple experts at the July forum called for the inclusion of innovative drugs for rare diseases in the scheme and suggested a mechanism that will allow government departments and nongovernmental institutions to jointly pay for these patients’ medical expenses.

There are several problems in the health system that have worsened the problems facing rare disease sufferers, including inadequate national insurance coverage, weak charity and lagging commercial insurance, Liu said.

Yang Xi is a pseudonym used to protect the privacy of the source in this story.