By Wang Xintong and Xiang Kai 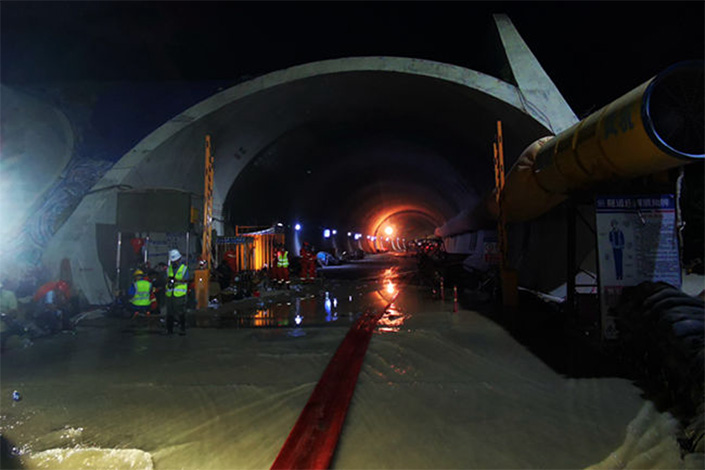 Fourteen construction workers who got trapped last week in a flooded tunnel in southern China have been found dead, state media reported Thursday.

On July 15, water flooded part of the tunnel, which is being built under a reservoir, trapping 14 workers more than a kilometer from the entrance.

The 1.78-kilometer Shijingshan tunnel is being built as part of the construction on the Xingye Highway Express Line, a highway that will run through urban Zhuhai and connect with the Hong Kong-Zhuhai-Macao Bridge. The project is scheduled to be completed by the end of next year, Caixin has learned.

Before the incident, some workers had heard a “strange noise” and had seen signs that one side of the tunnel might collapse, according to Yan Dawu, a deputy general manager with China Railway No. 2 Engineering Group Co. Ltd. (CREGC), which is building the tunnel. Although the workers tried to get people to evacuate the tunnel, “a large amount of water” flooded in, trapping them inside, Yan said.

Local authorities said part of the tunnel collapsed, allowing water to flow in from the reservoir. The cause of the collapse remains under investigation.

The authorities said the narrowness of the tunnel and geology of the surrounding land made it difficult to rescue the workers. In addition, pumping equipment used in the tunnel generated a large amount of carbon monoxide, further hurting rescue efforts.

Over the past eight days, some 2,000 rescuers have been working at the scene, said CREGC Chairman Wang Haiwang.