By Bai Yujie and Luo Meihan 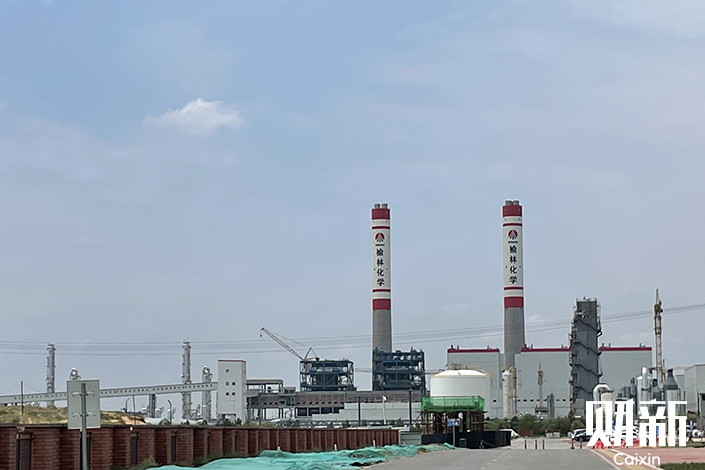 A resource-rich province in Northwest China has suspended the construction of a coal chemical project billed as the largest of its kind worldwide, as the country accelerates its drive to rein in energy consumption.

After over two years of construction, the project based in Yulin, Shaanxi province, was halted on July 2. Designed to produce chemical materials through processing raw coal, it was expected to complete all phases of construction by 2025 with 126 billion yuan ($19.4 billion) in estimated investment from state-owned Shaanxi Coal and Chemical Industry Group Co. Ltd., according to records (link in Chinese) on the company’s website.

The suspension is due to the project’s failure to complete an energy saving evaluation, which comes as local energy consumption targets are being lowered in the wake of ambitious national carbon pledges, making large-scale coal chemical projects subject to increasingly strict energy controls, sources familiar with the matter told Caixin.

China has vowed to control total energy consumption (link in Chinese) by assigning a certain number of quotas to local governments since 2011, the beginning year of its 12th Five-Year Plan. It further pledged to conduct “dual controls” (双控) which aim to rein in both energy consumption and energy intensity, namely carbon dioxide produced per unit of GDP, in the following five-year plans (link in Chinese).

After Beijing proposed to bring its overall emissions of carbon dioxide to a peak by 2030 and to net zero by 2060, local governments have significantly tightened controls on energy consumption, an industry insider from the chemical industry in Yulin told Caixin.

Shaanxi has pledged to consume energy equivalent to about 13.8 million tons of standard coal during the 14th Five-Year Plan period through 2025, nearly 40% less than the previous five-year period ending in 2020, said the insider.

The Shaanxi Provincial Development and Reform Commission hasn’t responded to Caixin’s request for confirmation of the quota figure provided by the source.

The suspended project, however, was expected to turn more than 24 million tons of coal into nearly 6 million tons of chemical products per year, an equivalent of about 17.1 million tons of standard coal, which far exceeds the province’s total energy consumption quota over the five-year period.

The coal chemical project would very likely see a reduction in total investment in the construction, a source from Shaanxi Coal told Caixin.

To heed the national call to crack down on the “blind development” of projects with high energy consumption and high emissions, the Yulin Municipal Development and Reform Commission held a meeting (link in Chinese) on June 5 to reiterate the dual controls and cuts in energy consumption.

The carbon emission intensity of coal chemical process in China was about 10 to 20 times the national average intensity per unit of GDP in 2019, according to estimates (link in Chinese) by Everbright Futures Co. Ltd.