By Wang Xintong and Bai Yujie 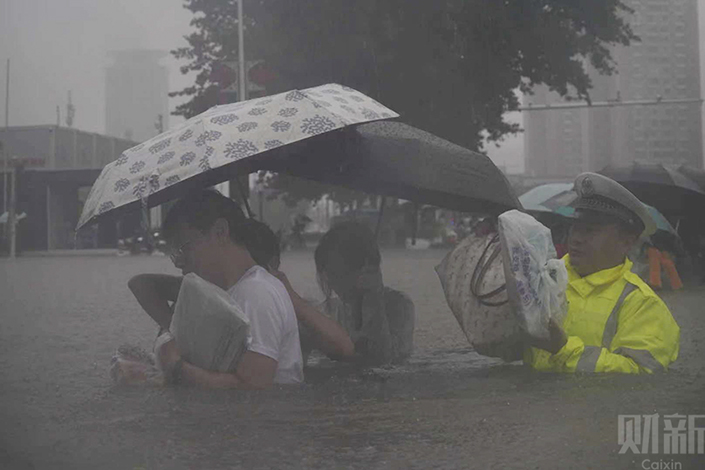 The official death toll from heavy rain and flooding in Central China’s Henan province has risen to 33, with eight people missing, as the region braces for several more days of severe weather that has already caused direct economic losses estimated at 1.22 billion yuan ($188.7 million).

Since July 16, heavy rainfall has affected more than 3 million people in the region and more than 370,000 have been evacuated from their homes including 256,000 who were relocated to safe areas, the province’s emergency management department said in a statement (link in Chinese) that also gave the updated death toll and damage estimate.

Zhengzhou, located on the banks of the Yellow River, China’s second-longest river, recorded 617 millimeters (24.3 inches) of rain from Saturday evening to Tuesday evening, nearly on a par with the city’s annual average rainfall of 640.8 millimeters, and more than 200 millimeters in just one hour on Tuesday.

From Wednesday to Thursday, other cities across Henan province, including Anyang, Hebi and Xinxiang, were hit by heavy downpours, with daily rainfall hitting record highs in some areas, according to data from the China Meteorological Administration.

The maximum precipitation in Xinxiang, a prefecture-level city some 80 kilometers north of Zhengzhou, reached 907 millimeters from Saturday to Thursday morning, the state-run Xinhua News Agency reported. Seven midsize reservoirs in the city overflowed, affecting more than 470,000 local residents and over 55,000 hectares (135,908 acres) of crops, it said.

Local media reported that the largest amount of rainfall in just two hours was 267.4 millimeters in Xinxiang, surpassing that of Zhengzhou on Tuesday when hundreds of people were stranded in the city’s subway stations. The government later confirmed (link in Chinese) that a dozen travelers trapped in one subway train had died.

In Xinxiang, an overground train carrying about 560 passengers was stranded for more than 12 hours due to flooding on the rail track. Carriages appeared to be tilting to one side at one point, a passenger who was rescued from the train told Caixin.

Anyang, the northernmost city in Henan, also experienced flooding as a result of heavy downpours. More than 73,000 residents have so far been evacuated, state-run broadcaster CCTV reported on Thursday.

The industrial province of Hebei, which lies north of Henan, has issued storm and flood disaster alerts for many cities including Xingtai and Handan. Two people died Wednesday after a tornado struck one of the province’s largest cities, Baoding, some 160 km southwest of Beijing.