By Fan Qiaojia and Cai Xuejiao 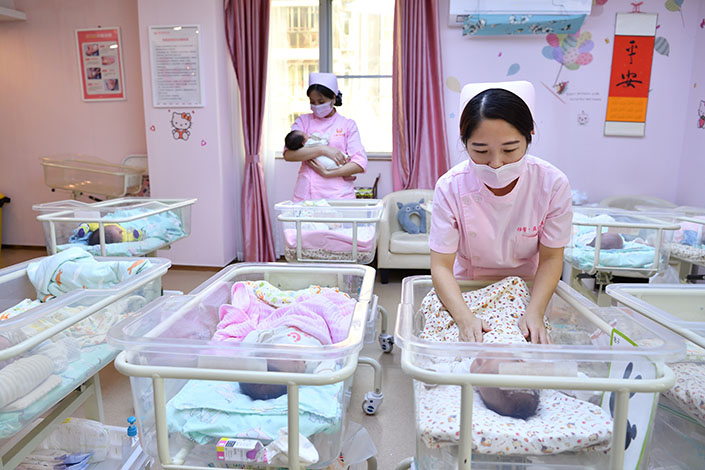 Families with more 13 million toddlers don’t have access to affordable child care services, according to the National Health Commission, a fact the government hopes to change as part of efforts to boost the country’s flagging birth rate.

There are about 42 million infants under the age of 3 in China, one-third of which are in need of child care services, Yang Wenzhuang, director of the commission’s Department of Population Surveillance and Family Development, said at a press conference Wednesday in Beijing.

Yang said there is still a big gap between supply and demand, with the nursery enrollment rate only about 5.5%.

Earlier this week, the State Council, China’s cabinet, released a plan to counter the country’s baby bust, detailing supportive measures for the newly announced three-child policy, which was introduced after the latest census showed a low fertility rate of 1.3, far below the expected figure of 1.8.

Among the measures, the central government said it will “promote the development of accessible, affordable, high-quality child care facilities.”

In China, private institutions are the main providers of child care services. Authorities have called for more and better public child care facilities to reduce the burden shouldered by new parents and guarantee the safety of children, amid scandals involving staff abusing kids under their care.

However, industry insiders have noted the difficulties in running affordable child care facilities, which often rely on government subsidies.

The founder of a child care institution which went out of business after two years told Caixin that operators charge high prices because one staff member can only take care of two to three children, and the need to hire qualified teachers further increases labor costs. However, many families that require child care services cannot afford the high price, they said.

The idea, which was proposed by the State Council as early as 2019, still faces challenges and has raised concerns over the quality of services provided by the kindergartens, according to an insider in early childhood education.