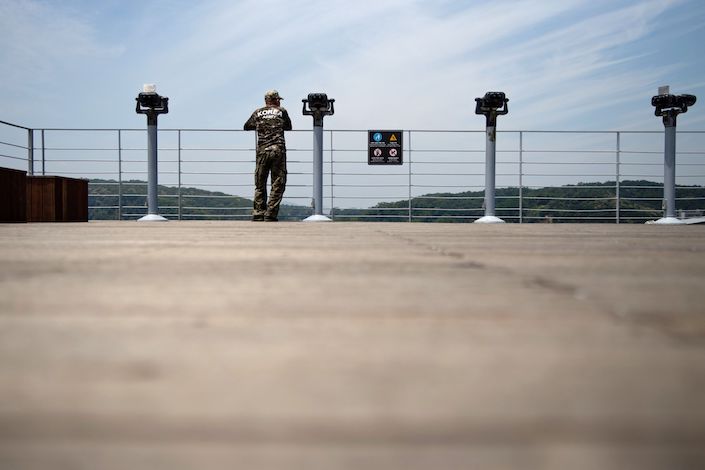 (Bloomberg) — North Korea’s Kim Jong Un and South Korea’s Moon Jae-in agreed in letters to restore relations, improving the prospects for a breakthrough in an extended stalemate in nuclear talks.

The two countries released what appeared to be coordinated statements Tuesday calling for reconciliation on the peninsula, with North Korean state media in Pyongyang saying they agreed “to make a big stride in recovering the mutual trust.” Both sides reopened hotlines that had been silent since a flare-up a year ago when Kim’s regime symbolically blew up a liaison office funded by Moon’s government.

The effort to thaw relations came on the 68th anniversary of the armistice that halted fighting in the 1950–53 Korean War, a conflict that never formally ended. Last week, U.S. Deputy Secretary of State Wendy Sherman reaffirmed President Joe Biden’s openness to talks during a visit to Seoul in which she met with South Korean officials including Moon.

“The fact that North Korea also officially acknowledged the restoration of the communications lines is positive, as is the language in the North Korean readout,” said Rachel Minyoung Lee, a nonresident fellow with the 38 North Program at the Stimson Center. “It appears that Pyongyang may be gearing up to resume some level of diplomacy with South Korea, but it’s premature to draw any conclusions about whether the restoration of the communications lines will lead to any tangible results.”

South Korea’s presidential office later said there was no discussion of a possible summit between Moon and Kim.

So-called peace stocks listed in Seoul that are expected to benefit from improved relations skyrocketed in Tuesday trading. Hyundai Elevator Co., the largest shareholder in Hyundai Asan, the company that operated jointly run and now mothballed projects in North Korea, jumped as much as 9% — the most in a year.

Moon, a long-time proponent of reconciliation, who helped broker Kim’s unprecedented summit with then-U.S. President Donald Trump in June 2018. He has exchanged letters with Kim since April, his office said.

While Kim’s summits with Moon and Trump set milestones for a North Korean leader, they led to no tangible steps to wind down his nuclear arsenal. As the disarmament talks stalled, Kim added to his stockpile of fissile material and missiles that can deliver nuclear warheads to the U.S., increasing his leverage if negotiations resume.

While Kim has shown little interest in talks since his last meeting in June 2019 with Moon and Trump in the demilitarized zone dividing the peninsula, his diplomatic window may be closing. Moon leaves office in May, and opinion polls suggest voters are open to replacing him with a conservative leader who might take a more hawkish tone.

“Pyongyang definitely prefers someone who would prioritize the North Korea issue over others,” said Ramon Pacheco Pardo, a professor in International Relations at King’s College London.

South Korea’s military also said it planned to restore regular communications with northern forces. They’ll exchange information twice a day, at 9 a.m. and 4 p.m., including details about illegal fishing in the Yellow Sea, the South Korean military said in a statement.

The hotlines that resumed operation Tuesday were established in 2018 after Kim and Moon held a series of summits. But North Korea last year accused South Korea of violating the agreement by allowing the launch of balloons carrying anti-Pyongyang messages as a justification for cutting off communication.

North Korea’s strict border closures amid the pandemic undermined an economy already battered by U.S.-led sanctions. North Korea’s economy will barely grow in 2021 after its worst contraction in decades as the country continues to struggle with the pandemic, international sanctions to punish it for its nuclear and missile testing, and a lack of trade with China, Fitch Solutions said in April.

At a ruling party meeting in June, Kim made a rare admission that the food situation was “growing tense” after typhoons wiped out crops last year. The comments underscored farm-sector shortfalls that have left 40% of the population undernourished, according to World Food Program estimates, and were made worse by his decision to close borders.

Any move toward reconciliation could face an immediate test next month, when U.S. and South Korean forces are slated to begin annual military exercises that Kim’s regime has denounced as preparations for war.

“Whether North Korea reports on this development domestically will give us a clearer idea of how committed the Pyongyang regime is to improving inter-Korean relations,” said Lee of the Stimson Center.