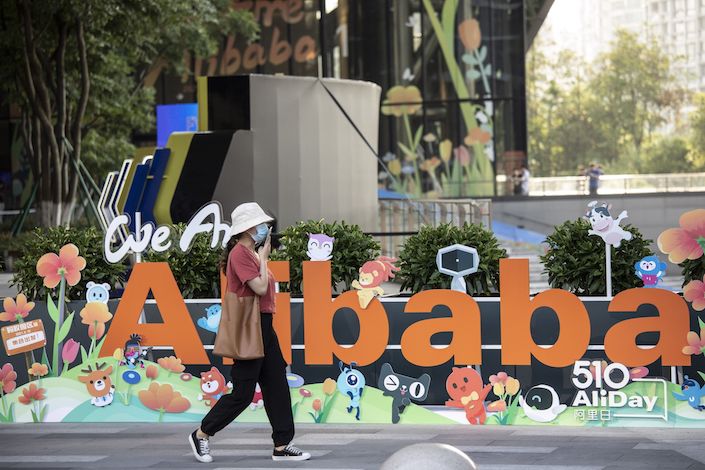 A person walks past a sign at the Alibaba Group Holding Ltd. headquarters in Hangzhou

Revenue for the three months ended June climbed from a year earlier to 205.7 billion yuan ($31.8 billion), short of the 209.4 billion yuan average of analyst estimates.

Net income rebounded to 45.1 billion yuan from a loss in the previous quarter following the company’s record antitrust penalty. The company said it was boosting its share buyback program by 50% to $15 billion. Alibaba shares were up slightly in pre-market trading.

Alibaba, among the first of China’s internet giants to feel the heat from Beijing authorities, has been closely watched for clues to the real-world impact of the upheaval that’s ensued since regulators went after industries from online commerce to ride-hailing and edtech. Months after swallowing a $2.8 billion fine for violations such as forced exclusivity with merchants, Jack Ma’s flagship e-commerce business is plowing money into areas like its bargains platform and community commerce to offset slowing growth at a time when rivals like Pinduoduo Inc. and JD.com Inc. are eroding its dominance in China’s e-commerce sales.

Alibaba is “undergoing an investment phase,” Daiwa analysts led by John Choi wrote in a recent research report. “Investment in Taobao Deals and Community Marketplaces will likely drag down core-commerce EBITA. These are the key investment areas for Alibaba to add 100 million new consumers in China by FY22.”

Resurgent pandemic risks in China, the first major economy to recover last year, have clouded the outlook for companies like Alibaba. The country is facing its broadest coronavirus outbreak since the pathogen emerged in late 2019. But even before the recent spike in infections, the rebound in consumer spending was uneven. During the company’s June 18 shopping festival known as 6.18, total parcel delivery volume rose 24% across the country, half the year-earlier pace, according to data from the State Post Bureau.

Along with slowing online retail sales, “both Douyin and Kuaishou actively joined the competition,” Blue Lotus Capital Advisor analyst Shawn Yang wrote in a July note. “Alibaba’s strategy for 6.18 of this year is more on user retention rather than growth.”

Alibaba in May forecast revenue expansion of at least 30% for the 12 months ending in March, a deceleration from the 41% of a year earlier. That prediction suggests that Alibaba’s share of China’s e-commerce sales will fall below 50% for the first time in 2021, industry researcher eMarketer said in a July 30 report.

Annual active consumers across the company’s China retail marketplaces grew a slower-than-expected pace to 828 million in the June quarter, driving a 35% increase in its commerce business. Across all businesses, the company had 912 million users in China as it targets 1 billion users in its home market by the end of 2021. Its bread-and-butter customer management revenue climbed just 14%, the weakest in at least three quarters, after Alibaba started combining commission revenue with the figure.

Executives last quarter pledged to channel all incremental profit into investment to refocus on its business as Beijing’s campaign to rein in tech companies continues. Alibaba joined in a government-led bailout of Suning.com Co., boosting its stake in the troubled electronics seller. The corporation’s cloud division also pledged $1 billion to support startups in Asia while opening new data and innovation centers in Southeast Asia. In July, it said it would become an anchor investor in a new HK$2 billion ($258 million) fund for startups located in the Guangdong-Hong Kong-Macau region.

“The trajectories of Alibaba and China are inextricably linked,” Alibaba Chairman Daniel Zhang said in his annual letter to shareholders last month. “Alibaba owes its growth and development over the past 20 years to society and to the era that we belong.”

Alibaba shares touched a 16-month low last month as the government’s crackdown spread to the online education sector and more regulators including the internet-industry overseer stepped up scrutiny of the sector. The company has lost more than $300 billion in market value from its October peak, just before Ant’s initial public offering was scrapped and the tech crackdown began in earnest.

In the wake of the crackdown, Alibaba has made tentative steps at opening up its ecosystem, applying to create a mini app for its Taobao Deals platform on Tencent’s WeChat service. The Wall Street Journal reported that Alibaba is considering letting customers use Tencent’s WeChat Pay to pay for purchases on Taobao and Tmall. The moves would represent a substantial concession to

Beijing as both companies have historically barred each other’s services on their own platforms.