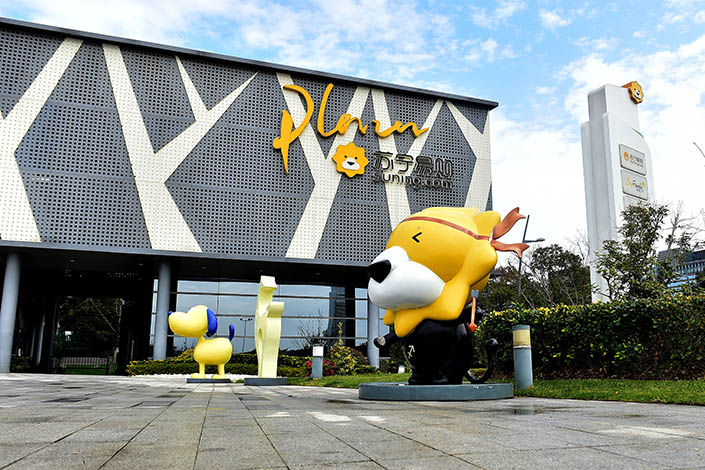 The headquarters of Suning Group in Nanjing, Jiangsu province, on Feb. 27. Photo: VCG

The bailout comes in the form of an equity transfer deal involving four major shareholders, including the founder of Suning.com’s parent, Zhang Jindong, who transferred a 16.96% stake in the Jiangsu province-based company to a fund created by the rescue consortium, according to a company filing (link in Chinese) published late Monday.

The consortium, helmed by the government of East China’s Jiangsu province, made its move following the failure of earlier talks involving state-owned funds in the southern metropolis of Shenzhen. Shenzhen’s willingness to invest faded after due diligence, sources close to the talks told Caixin.

Read more
In Depth: How Suning Fell Into Crisis as JD.com Surged

The announcement signifies major progress in Suning.com’s struggling efforts to seek bailouts from state funds and other industrial companies to help it to repay tens of billions of yuan in outstanding debt. The share price of Suning.com, the e-commerce arm of the retailing giant Suning Holdings Group Co. Ltd., jumped 10% Tuesday, the first day it resumed trading after being suspended for about two weeks.

After the strategic investment takes effect, Zhang will relinquish his role as controlling shareholder, although he will remain the largest shareholder with a 20.35% stake. Suning.com also will not have a controlling stake because no single shareholder will have more than 30% of the voting power, according to the filing.

China retailing pioneer Suning.com was caught up in an escalating debt crisis last year after it had borrowed significantly to fund an acquisition spree from 2015 to 2019. Despite losses at its core retail business, it continued to invest in real estate, telecoms, sports streaming, and star football club Inter Milan.

It has been trying to climb out of the crisis by seeking state help and offloading assets, including planning to offload staff housing in its home city of Nanjing, Jiangsu’s capital.

Last month, Suning.com announced that 5.59% of its shares, worth 3.2 billion yuan, would be transferred under a bailout scheme to a fund controlled by the Jiangsu provincial government.

In February, major shareholders of Suning.com reached an agreement to sell a combined 23% of the company’s shares to two state-owned investment bodies in Shenzhen for 14.8 billion yuan. The agreement subsequently failed.