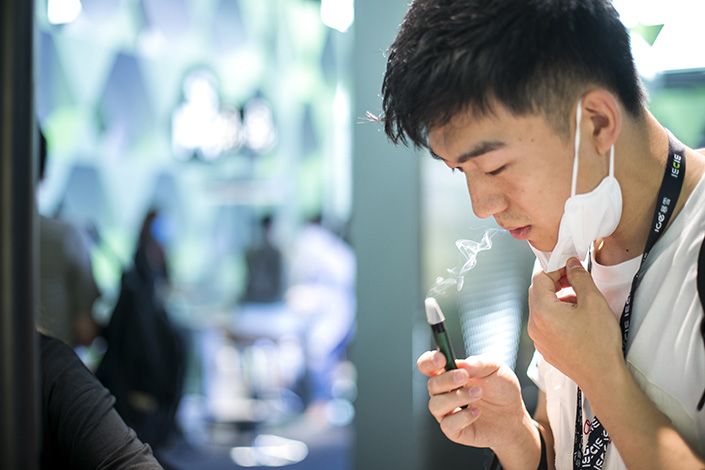 A man is trying an e-cigarette in Shanghai on May 18. Photo: VCG

Shares of e-cigarette firms fell after a state media report criticized them for continuing to illegally sell their products to under-18s, in the latest instance of such media attention tanking stocks.

Smoore International Holdings Ltd. shed as much as 7.8% in Hong Kong before erasing most of the loss after a Xinhua report late Wednesday on the ability of adolescents to obtain e-cigarettes.

“Confidence is shaky,” said Gu Xiangjun, an analyst at Capital Securities Corp. “Any negative news is quite poignant right now.”

The Xinhua story, in which undercover reporters were dispatched to stores in Tianjin and Shenyang, said some didn’t perform age checks on buyers, and even alleged they encouraged minors to find adults to buy on their behalf. It cited an expert as calling for a tougher crackdown.

Such claims are made regularly in the Chinese press, and one vaping industry insider said they didn’t understand what all the fuss was about, but speculated the official Xinhua News Agency’s involvement had brought undue attention.

China’s vaping industry has been in flux as it awaits clarity on a proposed amendment to China’s tobacco law that would give the State Tobacco Monopoly Administration jurisdiction over it. That could mean costly red tape, new taxes or, most dramatically, wholesale nationalization.

Jittery investors have been closely scrutinizing state media for signals about which sector regulators will target next as part of an ongoing crackdown that triggered a $1 trillion global sell-off last month.

Also on Thursday, shares of Biopharmaceuticals company Changchun High & New Technology Industry Group Inc. slumped by its 10% limit while Anhui Anke Biotechnology Group Co. Ltd. fell as much as 17%, after a Xinhua report about the harm from misuse of human growth hormone injections by parents who are anxious about their children’s height.

One e-cigarette industry insider told Caixin a more significant issue was that some brands have pivoted to using WeChat for sales while in-store advertising and sales have been more closely scrutinized.

Protecting minors has been at the center of concerns about China’s flourishing e-cigarette industry, which benefited from a hands-off approach by market regulators until two rounds of regulation in November 2019 and July 2020. The first was on sales to minors, while the second was a blitz on “covert online sales.” Parents and guardians were banned from encouraging kids to vape by an amendment to China’s Law on the Protection of Minors, which came into effect at the start of June.

“Offline stores basically have to verify the age of consumers and are not allowed to sell to minors, and local regulators and brands will punish them if they violate the rules,” the insider said.

According to the World Health Organization, e-cigarettes are particularly dangerous to children and adolescents. Nicotine, a highly addictive drug present in most vapes, can have “deleterious impacts” on the development of minors’ brains. Adolescents who use e-cigarettes are more than twice as likely to become cigarette smokers.