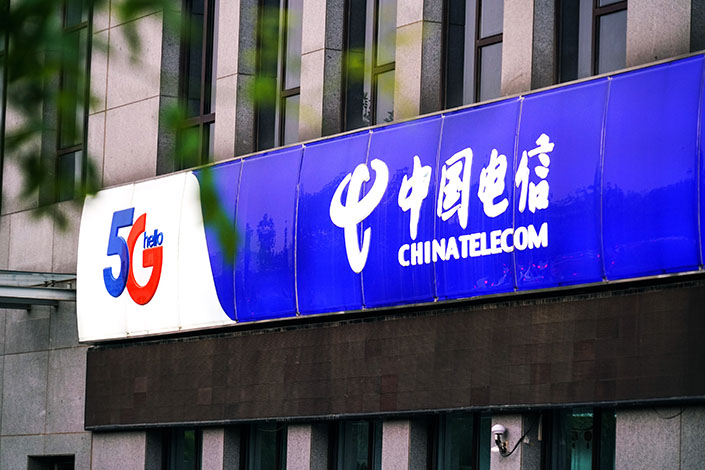 A China Telecom office in Beijing in August 2020. Photo: VCG

China Telecom Corp. Ltd., one of the country’s three major state-owned mobile carriers, achieved just a third of its full-year investment target in the first half of 2021, amid a shortage of chips and weak demand for its 5G equipment, according to a senior executive.

The company spent 27 billion yuan ($4.2 billion) in the first six months of this year, far less than half of the previously announced 87 billion yuan earmarked for the whole year, Liu Guiqing, executive vice president at China Telecom, said during an earnings conference call with analysts and the media Tuesday.

One reason is the ongoing chip shortage, which led to the slower-than-expected supplies of some equipment used for the company’s investment projects, Liu said.

The global chip shortage was triggered early last year by the Covid-19 pandemic, which led manufacturers to dramatically slash business projections and semiconductor orders. The stronger-than-expected recovery in the second half left integrated circuit suppliers unprepared as production couldn’t catch up with surging demand.

Adding to that was escalating frictions between China and the U.S. that threatened Chinese tech giants’ access to advanced chips, with the shortage curbing supply chains for manufacturers of goods from vehicles to electronics.

Liu also linked the worse-than-expected investment performance to the relatively weak demand for its 5G equipment using the 2.1 GHz frequency, which is considered as a less mature technology. China Telecom also provides 5G equipment featuring the widely used 3.5 GHz frequency range, for which demand remains normal, according to Liu.

The major differences between the two frequency bands lie in coverage and speed. The 2.1 GHz band enables 5G signals to travel longer distances but with lower data transmission speeds, while the 3.5 GHz band provides less coverage but transmits data at faster speeds.

In the first half of this year, China Telecom’s total revenues jumped 13% year-on-year to 219 billion yuan, nearly a quarter of which came from sales of its industrial digitalization services, which rose 17% year-on-year, according to the company’s interim earnings report released Tuesday.

In the era of 5G, enterprise and government-focused industrial digitalization services have become a new profit driver for China’s mobile carriers, including cloud computing, internet data centers and the Internet of Things.

Also on the Tuesday conference call was China Telecom CEO Ke Ruiwen, who predicted that the company is likely to achieve year-on-year growth of more than 20% in sales of industrial digitalization services in 2021.

Ke’s estimate comes as many businesses and organizations in China have expedited their transition to digitalization in a bid to optimize their workflows, a business requisite that grows ever more urgent as the world appears far from bringing the Covid-19 pandemic to an end.

China Telecom on Friday set the price for its planned listing on the main board of the Shanghai Stock Exchange at 4.53 yuan (70 U.S. cents), which could see it raise as much as 53.7 billion yuan.

The move to return to the Chinese mainland capital market came after its American depositary shares were delisted from the New York Stock Exchange in May following an executive order issued by former U.S. President Donald Trump barring U.S. investors from trading shares of any company the U.S. deems to have ties to the Chinese military.