By Ding Yi and He Shujing 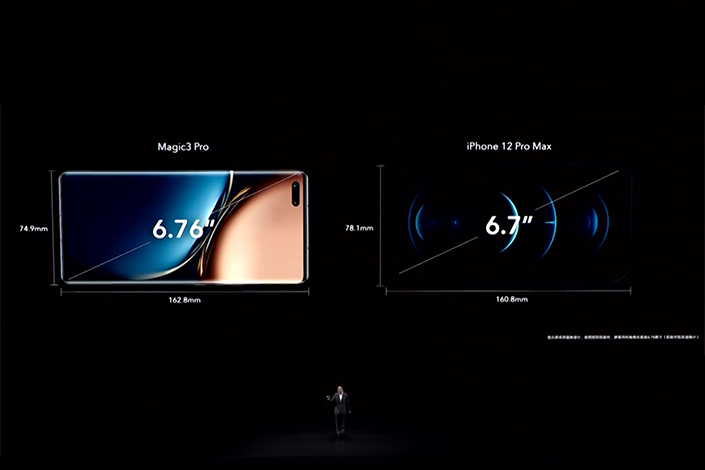 The launch on Thursday night suggests that the former Huawei budget handset unit is eager to revive its erstwhile glory. It is showing signs of a comeback after claiming the title of China’s fifth best-selling smartphone brand in the second quarter with a market share of nearly 9%, a jump from a 3% share it held shortly after being ditched by Huawei.

The Magic 3 range includes a standard model, the higher-spec Magic 3 Pro and the highest-spec Magic 3 Pro Plus, with all three models using Qualcomm’s Snapdragon 888 Plus 5G chips, the same as those installed in Xiaomi’s newly launched premium phone series Mix 4. It also has a similar exterior design to Huawei’s high-end Mate series.

The brand’s independence appears to have had a positive effect. In January, Honor announced that it had forged partnerships with major suppliers including Qualcomm, AMD, Intel, Samsung, Microsoft, Micron Technology and MediaTek.

The Magic 3, which will first go on sale in the Chinese market next week at a retail price range of between 4,599 yuan ($710) and 7,999 yuan, will come preinstalled with Google Mobile Services (GMS), an Honor representative told Caixin. It means that Magic 3 owners will have access to popular Google apps like Google Play and Gmail.

Incorporating GMS into the Magic 3 will give a boost to Honor’s efforts to introduce the new phone to the overseas markets where the Google-developed mobile app ecosystem prevails.

The Magic 3 launch has excited phone dealerships, with some saying that they consider the premium Honor phone as an alternative to the Huawei ones, especially at a time when the Shenzhen-based tech giant is finding it hard to launch an updated version of its high-end Mate series this year in the wake of the U.S. sanctions.

“If buyers come to me for a (Huawei) Mate, I will recommend an (Honor) Magic to them,” said a dealer, speaking on condition of anonymity.

Huawei last month unveiled its P50 smartphone series after a months-long delay, though the fallout of U.S. sanctions means the handsets contain 4G microchips instead of the 5G ones that the tech giant initially touted.

But uncertainties in U.S. policies toward Chinese tech companies still pose a risk for Honor.

Earlier this month, a group of 14 Republican lawmakers in the U.S. House of Representatives asked the U.S. Commerce Department to add Honor to the Entity List, Reuters reported, putting the Chinese company at risk of being banned from buying U.S. technology and software.

In the first quarter of 2021, Apple controlled 72% of the above-$800 price market segment in China, capitalizing on the woes of Huawei, which saw its market share drop to just 24%, according to research firm IDC.