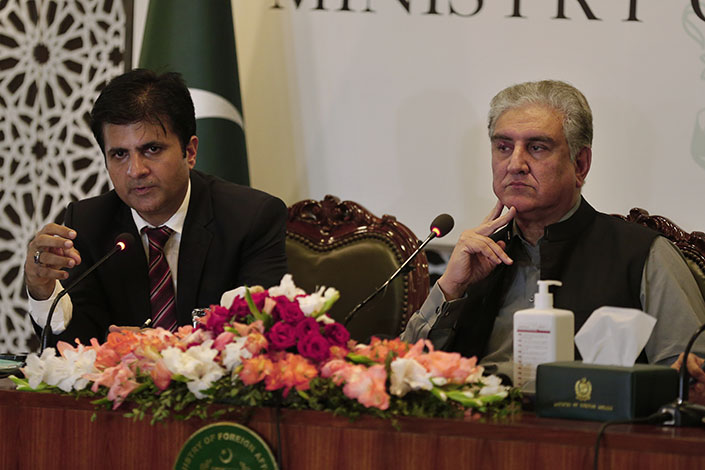 The explosion on a bus in northern Pakistan that killed nine Chinese nationals and three Pakistanis last month was a suicide bombing carried out by the Taliban movement in Pakistan, the Pakistani Foreign Ministry said Thursday.

The terrorist attack was planned in Afghanistan, which also provided material support, and the suicide bomber was trained in Afghanistan and brought to Pakistan to carry out the attack, the ministry said in a statement. Some of those involved have been arrested, while others remain in Afghanistan, the statement said.

“The Government of Pakistan reiterates its strong commitment to apprehend all those responsible for this heinous crime and bring them to justice,” the ministry said.

The explosion took place on July 14 on a bus transporting Chinese and Pakistani workers to the site of a hydropower project. Pakistan later “confirmed traces of explosives” were found, according to the country’s Information Minister Fawad Chaudhry, who said at the time that terrorism could not be ruled out as the cause of the blast.

“China and Pakistan will follow the important consensus reached by leaders on both sides, ascertain all facts and truth, hold the culprits accountable and bring them to justice,” she said, adding that the two countries will “keep strengthening security cooperation mechanisms to ensure the safety of Chinese projects, people and institutions in Pakistan.”

Javed Iqbal, a senior Pakistani counterterrorism police officer, said at the news conference that the attackers rammed an explosive-laden car into the bus and that “around 100 to 120 kgs of high explosive were used in the car bombing,” according to the Reuters report.

Chaudhry, the information minister, later wrote on Twitter that traces of explosives were found during a preliminary investigation.

In a phone conversation with Pakistani Prime Minister Imran Khan, Premier Li Keqiang urged the country to “use all necessary means to find out the facts in a serious and responsible manner, and ensure that the perpetrators behind the incident are brought to justice,” according to the state-run Xinhua News Agency.

Chinese Public Security Minister Zhao Kezhi has also spoke with his Pakistani counterpart over the phone, while China’s Ministry of Public Security sent criminal investigation experts to Pakistan to assist with the probe, according to Xinhua.