Update: As U.S. Leaves, China Prepares to Engage With a Taliban-Ruled Afghanistan 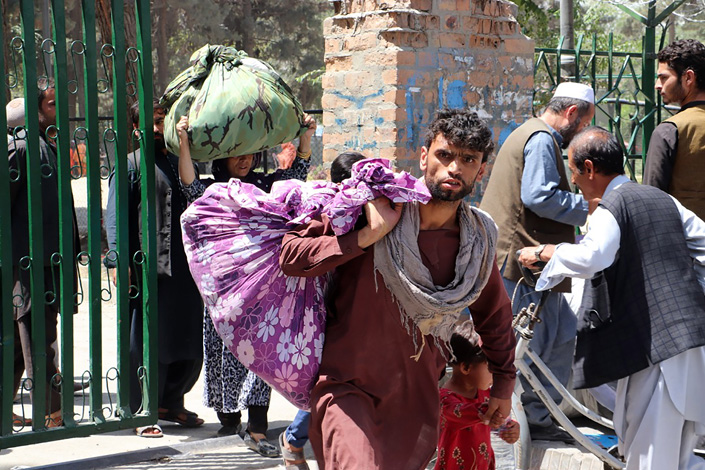 In a Sunday statement, the embassy also asked all parties in Afghanistan to ensure the safety of Chinese citizens, institutions and interests, and reminded Chinese citizens to stay indoors. Hua also said that China “respects the will and choice of Afghan people,” indicating that Beijing is readying to recognize the new regime.

The Taliban took control of the presidential palace in Kabul on Sunday, hours after former President Ashraf Ghani left the country. Ghani said in a Facebook post that he “came across a hard choice” and left to avoid bloodshed and the destruction of Kabul.

In the capital, crowds were seen rushing to the Hamid Karzai International Airport in the hope of getting on planes to leave the country, according to media reports.

Liu Junming, a Chinese national working in Afghanistan, told domestic media outlet The Paper that gunshots and explosions could often be heard, and local people were trying to get flight tickets to flee the country.

Recent events and statements signal that China has been preparing in advance to deal with a new Afghanistan possibly ruled by the Taliban.

Wang said during the meeting that the Taliban is expected to “play an important role in the process of peaceful reconciliation and reconstruction in Afghanistan.” He called on the Taliban to “completely” cut ties with all terrorist forces, including the East Turkestan Islamic Movement, which “directly threatened China’s national security and territorial integrity.”

In response, Baradar said the Taliban would not allow any force to use Afghan territory to harm China. As a co-founder and top diplomat of the Taliban, Mullah Baradar has now become the de-facto leader of Afghanistan.

Sharing a 90-kilometer border, China and Afghanistan have a long history of engagement. In 1955, China established diplomatic relations with the then Kingdom of Afghanistan and a mutual boundary treaty was signed in 1963. After the Soviet Union invaded Afghanistan in 1979, China stopped formal relations with the Soviet-backed government and downgraded the embassy to a representative office which only dealt with consular and visa issues.

After the U.S.-led coalition overthrew the Taliban in 2001, Beijing resumed its diplomatic relations with the civilian government. In February 2002, the Chinese embassy resumed operations in the country, and in October that year, the top Afghan envoy from the then transitional government visited China.

However, as the Sep. 11 deadline for the U.S. troop withdrawal from Afghanistan approached, China began to sound the alarm over the security situation in the country, repeatedly urging Chinese nationals to leave.

Wang in early June suggested five ideas and propositions, which included maintaining intra-Afghan talks and bringing the Taliban back into the political mainstream.

Also, at a meeting of foreign ministers of the Shanghai Cooperation Organization-Afghanistan contact group in mid-July, Wang put forward five proposals, including preventing the U.S. from shirking its responsibility and preventing the resurgence of terrorist forces.

John Allen, president of the Brookings Institution, noted that “the United States will now have to swim hard upstream to preserve or even exert any U.S. values-based influence in the region for a very long time.”

“It’s unlikely the United States would have a welcome role in a Chinese-brokered regional trade scheme, but it’s entirely likely that with Beijing and Moscow in the driver’s seat across much of Central and South Asia, Iran could become a more constructive player,” he wrote.