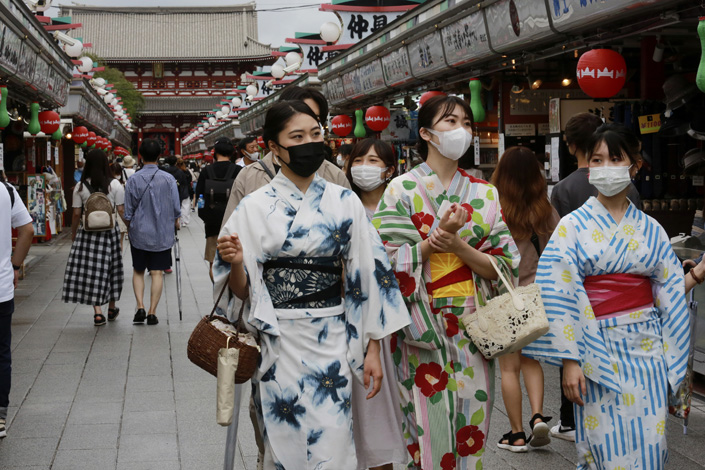 After electing to plow ahead with the Olympic Games last month, the Tokyo metropolitan region faces a disaster-level situation as Covid-19 infections spread rapidly, threatening to overwhelm the hospital system as some ill patients are increasingly being told to stay home to recuperate, Japanese experts warned.

The Fujimino Emergency Hospital in Saitama, a prefecture just north of central Tokyo, highlights the scale of the challenge to Japan’s health care system.

“All the beds are full,” a medical worker told Caixin, explaining that over the past week or two 38 beds designated for Covid-19 patients have been gradually occupied. “We try to accept patients with fever, but have to turn some [emergency patients] away,” the medical staffer said.

The Japanese government has declared its fourth coronavirus “state of emergency” for the month of August, implementing a range of mostly voluntary practices to curb people’s outside activities, rather than stricter lockdown measures. Yet, as people become habituated to the emergency, the strategy is facing growing challenges.

“Infections are spreading at an unprecedented speed and the situation is out of control — a disaster-level state of emergency” Norio Omagari, a member of a Tokyo government coronavirus advisory panel of experts, said on Thursday.

On Friday, Tokyo reported 5,773 new cases while Japan as a whole reported 20,365 new cases, both marking the largest figures so far. Currently, Tokyo’s positive cases with severe symptoms stands at its highest level of 268 while the nationwide number reached 1,603, a new record.

As of Sunday, in Tokyo and surrounding three prefectures alone, more than 7,300 coronavirus patients were hospitalized while, potentially more problematically, at least 56,000 people who had tested positive for the virus had been told to stay home to recuperate. Many more are waiting for further instruction from health centers, according to official figures compiled by Caixin.

Prime Minister Yoshihide Suga told reporters on Friday, he made orders to set up “oxygen stations” for those staying at home. But he has repeatedly denied the link between Olympic Games and the coronavirus surge, citing the reduced flow of people in city centers.

Daily coronavirus deaths in the country remain small compared with previous waves, apparently because the most vulnerable elderly population is mostly inoculated. Ten people were reported to have died of Covid-19 infections Sunday. Statistics from the Prime Minister’s Office website show that 37.2% of Japan’s total population were fully vaccinated as of Sunday.

The impact of the Olympics on Covid-19 infection trends is nuanced, experts said.

Yuki Furuse, a member of the Covid-19 countermeasures team at Japan’s Health Ministry and an assistant professor at Kyoto University, told Caixin that the impact of the Olympics on the further spread of the virus, so far, has been smaller than anticipated. But the international gathering had nonetheless contributed to the rising caseload: “If it had not been held, the number of infections would be smaller than the current figure,” he said.

Similarly, Shigeru Omi, head of the government’s coronavirus countermeasures subcommittee, recently told a committee of the national legislature that he does not think the infections of Olympic personnel under the “bubble system” were directly related to the rapid spread of infections but “the fact that the Olympics are being held has had an impact on people’s awareness.”

State of emergency declarations are now in effect in six prefectures, including the Tokyo metropolitan region’s four prefectures, with an end date of Aug. 3, partially overlapping with the schedule for the Paralympic Games.

Furuse stressed that the impact of the Olympics may not be fully visible yet. And following the celebratory atmosphere engendered by the Olympics, he fears Tokyoites are likely to flock back to their hometowns for the coming mid-August Obon Festival, which could further exacerbate the spread of the virus.

“If there was a powerful signal like the Olympics being canceled, many people would think ‘If it’s that dangerous, I’m not going home in August’.”

A Tokyo official in charge of coronavirus affairs admitted to Caixin that, “Medical resources have begun to turn tight.”

Earlier, Fuji News Network reported that the number of patients receiving treatment at home has begun to surge and that at least eight such patients in Tokyo have died at home since August.

With limited medical resources, can the health centers monitor the daily condition of those testing positive, as they have done in the past? The official said this was still being done, but acknowledged that some people were now complaining it is now difficult to reach the “follow-up center” by phone.

Looking ahead, Furuse warns that, with more patients seeking hospital care, the number of people with severe symptoms will increase further, potentially setting the stage for Tokyo’s medical system to break down in ways similar to how Osaka hospitals collapsed this spring. He declined to rule out the danger that Tokyo could face tragic events like those which swept India or Indonesia.