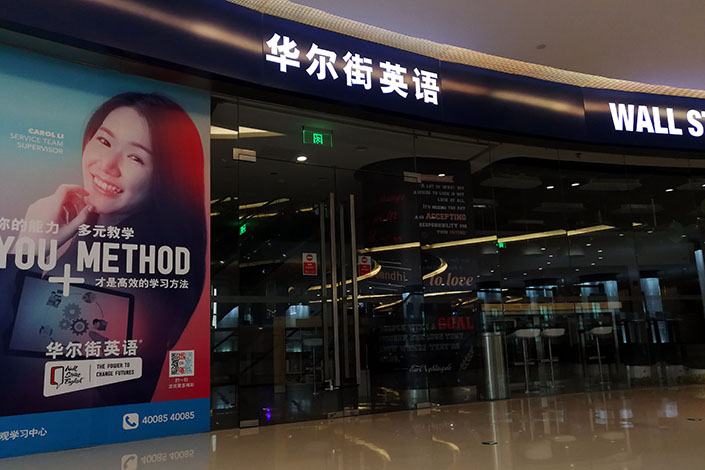 International competitors are seeking to capitalize on the woes of Wall Streel English Training Center (Shanghai) Co. Ltd., once one of the largest providers of language learning services in China, with Swiss-based rival EF Education First announcing on Saturday it would offer a mix of free online or steeply discounted offline courses for students affected by reported closures of the ailing firm’s domestic training centers.

The onetime subsidiary of Wall Street English, which was founded in 1972 in Italy and is now headquartered in Barcelona, is facing bankruptcy after closing many of its franchised English training centers in China and laying off the affected workers, domestic media reported last week.

Language education company EF Education First on Saturday began marketing its services to students of Wall Street English China     if they “cannot complete their original courses,” adding that it had been active in offering language courses in China for more than two decades. EF Education was founded in Sweden in 1965 and is now based in Lucerne, Switzerland.

“EF will provide free online courses and provide substantial discounts for Wall Street English students who choose to upgrade to EF online or offline courses,” the company said in a promotion on Weibo on Saturday that appeared aimed at luring away students concerned about Wall Street’s business setbacks.

The EF Education moves come as Beijing tightens crackdown on the country’s sprawling after-school tutoring industry. EF acknowledged it had no business cooperation relationship with Wall Street English but did so “out of corporate responsibility and empathy.” Some industry analysts labeled the offer a publicity stunt.

Wall Street English China is expected to announce its bankruptcy next week, according to a report in yicai.com, picked up by the South China Morning Post. The report quoted an anonymous member of staff due to the economic impact of the Covid-19 pandemic, adding that the recent crackdown on private tutoring was the “last straw.”

The threat of bankruptcy comes as authorities in China last month introduced sweeping reforms of the after-school tutoring industry and forced a restructuring of the sector. However, an analyst told Caixin that the company’s troubles appeared to be largely independent of the government’s recent regulatory actions.

“Because they mainly targeted adult customers, we don’t think the bankruptcy has a strong relationship with the broader regulatory crackdown that has roiled the education sector,” said Tom Nunlist, an analyst at financial consulting firm Trivium China.

Starting life as the China subsidiary of Wall Street English, co-created by Luigi Tiziano Peccenini and Luciano Biondo nearly 40 years ago, Wall Street English China has been through several corporate owners in the past decade, according to financial news reports. In 2010, it was acquired by Pearson PLC from private equity firm The Carlyle Group and Citi Private Equity and then sold to Baring Private Equity Asia and CITIC Capital in 2017.

An industry insider told Caixin that Wall Street English China had begun cutting jobs several months ago, with some investors withdrawing their investments. Some experts said the downfall of Wall Street English China was largely attributable to the fact that the firm had become less competitive over the years in attracting investment for its business targeting adult learners rather than focusing on K-12 courses.