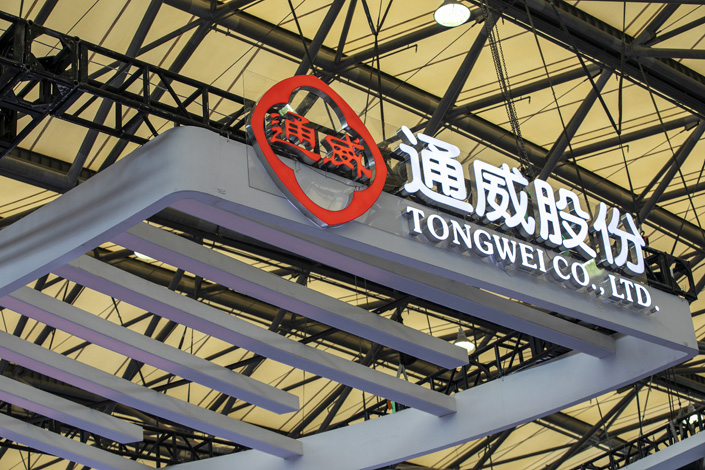 The Tongwei booth at a photovoltaic expo in Shanghai on July 5. Photo: VCG

Two of China’s biggest polysilicon manufacturers reported staggering growth in first-half profits, buoyed by a surge in prices for the essential material used in the production of solar panels.

The pair’s stellar financial performance was fueled by a 145% jump in the price of polysilicon in the first half of this year, with the price of the crucial material standing at 206 yuan per kilogram by the end of June compared to 84 yuan at the beginning of the year, according to data provided by renewable energy research firm InfoLink Consulting. Xinjiang accounts for 42% of global production capacity, according the consultancy.

The price rise could be attributed to the expanded production capacity in the photovoltaic (PV) battery industry, according to a report by the China Nonferrous Metals Industry Association.

From January to June, China’s output of photovoltaic batteries reached 97.46 million kilowatts, up 52.6% year-on-year, according to the National Bureau of Statistics.

Growing demand for photovoltaic cells has prompted polysilicon-makers to beef up their production. The Chinese PV market rebounded in 2020 after a two-year slowdown, installing 48.2 GW of PV, compared to 43.4 GW in 2018 and 30.1 GW in 2019, according to an April report by the International Energy Association (IEA).

China has total installed PV capacity of 253.4 GW installed, almost one third of the global total, according to the IEA.

Tongwei will begin operation of the first phase of its polysilicon manufacturing project in Baoshan in Southwest China’s Yunnan province and the second phase of a similar project in Leshan in Southwest China’s Sichuan province by the end of 2021, according to the interim report. These are part of its efforts to achieve annual production capacity of 330,000 tons by 2022.

Meanwhile, Daqo has set a higher target for 2021, when the company aims to grow its polysilicon production capacity by 10% year-on-year to as much as 85,000 tons, with plans to increase that to 270,000 tons by 2024, according to its interim report.

In the first half of 2021, Tongwei produced 50,600 tons of polysilicon in China, controlling 22.3% of the domestic market, while Daqo held an 18.2% share, according to their interim reports.

Xinjiang Daqo said in its July prospectus that the U.S. sanctions won’t have a significant impact on their business as the country is not a significant market for its goods.