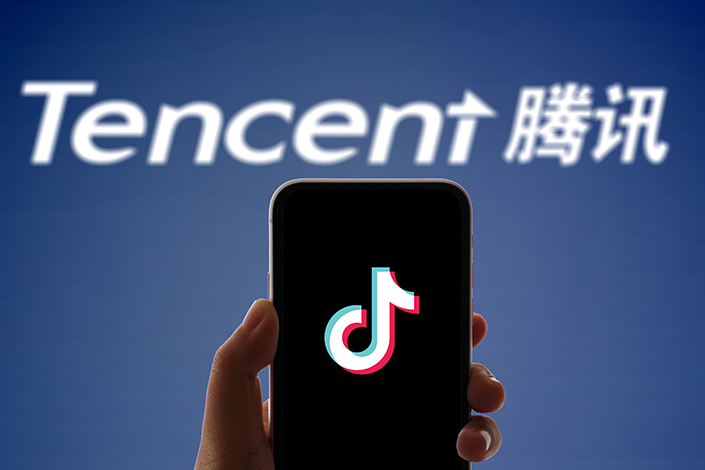 The Chinese version of international short-video sensation TikTok has taken down thousands of user-generated clips suspected of violating copyrights to a TV crime drama streamed on Tencent Video, as legal tussles intensified over intellectual property infringement and online distribution rights between the companies.

The showdown pitting user-generated content against expensively produced professional video came to a head after Tencent Video, the video streaming platform owned by Tencent Holding Ltd., said last week it had filed a lawsuit against Douyin for copyright infringement and unfair competition, alleging it allowed users to upload content from “Crime Crackdown” without its consent, according to domestic media reports.

In the case of “Crime Crackdown,” Tencent Video asserted it held exclusive rights for the online dissemination of the drama, which chronicles the crackdown on organized crime gangs by Chinese police. It demanded that Douyin pay it compensation of 100 million yuan ($15.4 million) for allowing widespread copyright infringement to take place on its platform.

Douyin, which along with its sister app TikTok is owned by ByteDance Ltd., said in a statement Saturday that it had removed more than 8,000 user-generated videos considered to violate the copyright of “Crime Crackdown.” At the same time, it suggested that it had a right to distribute such clips for promotional purposes under a contract with the co-producers of the show, which has accumulated nearly 2 billion views since its release on Aug. 9.

Douyin asserted in the statement that it had actually signed a cooperation deal with a firm that co-produced “Crime Crackdown” with Tencent Video, under which Douyin users were encouraged to take part in promoting the drama by creating short videos related to the show. The deal also involved establishing an official account for “Crime Crackdown” on Douyin, with its operator regularly publishing content associated with the TV drama.

The copyright dispute comes as entertainment production companies, industry associations and video streaming platforms have vowed to step up their legal actions against short video platforms, where many users produce content using clips adapted from movies and TV shows without copyright owners’ authorization.

The call has attracted the attention of the National Copyright Administration, which in April said that it would tighten its oversight of copyright infringements on short-video platforms including ordering them to improve their copyright protection systems in order to better handle complaints about violations.

In the first half of 2021, TikTok and Douyin generated more than $920 million in revenue globally on Apple’s App Store and Google Play, up 74% year-on-year, giving the Chinese-owned app the title of the world’s highest-earning nongame app.

In the face of the huge success of Douyin and TikTok, Tencent in June announced plans to reposition its own short video app Weishi to focus on offering professionally produced film and TV clips which the company’s vice president Sun Zhonghuai said would help to distribute Tencent’s licensed content and redistribute licensed works by other creators. The move came after Tencent integrated Weishi and several other platform and content offerings into a new online video business unit headed by Sun, in an effort to enhance profitability and quality.

Since April, other major Chinese streaming players Youku Tudou Inc. and iQiyi Inc. have committed themselves to tackling widespread piracy on short-video platforms.