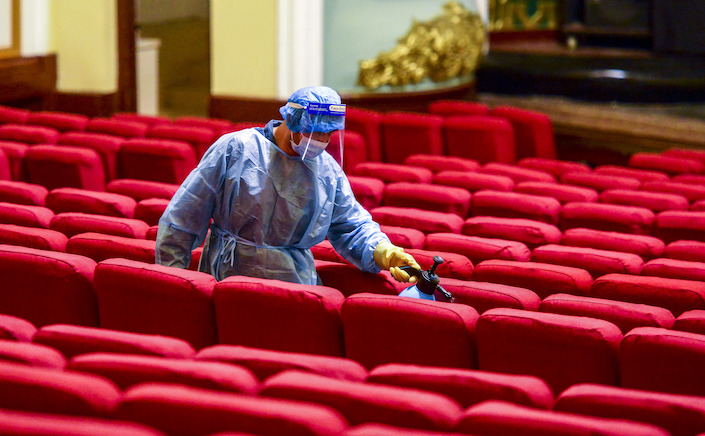 China’s weekly box office sales hit the lowest level since May as cinemas in some parts of the country suspended operations amid the latest Covid-19 flare-ups.

In the week through Aug. 22, Chinese cinemas’ box office takings slumped 37% from the previous week to 317 million yuan ($49 million), according to statistics from the China Movie Data Information Network (link in Chinese).

According to Alibaba-owned online ticket platform Dengta, as of Aug. 21, 20% of cinemas were closed in the market because of the Covid surge, leaving 8,559 cinemas in operation.

During the week, the highest-grossing movie was action film “Raging Fire” directed by late Hong Kong director Benny Chan and starring Donnie Yen, raking in 150 million yuan in ticket sales, nearly half the total. Second and third place went to the Huayi Brothers’ romance movie “Upcoming Summer” with 38.6 million yuan in sales and Light Chaser Animation’s “White Snake 2: The Tribulation of the Green Snake” with 36.6 million yuan. All three movies had been showing in cinemas since July.

“Luca,” Disney/Pixar’s latest animation film with an Aug. 20 release date, received a muted response from Chinese viewers and opened to only 33 million yuan in ticket sales.

Piracy may have affected the movie’s China earnings since it was released over Disney+ in June, resulting in the film being available on piracy networks. Following “Soul” and “Raya and the Last Dragon,” “Luca” was the third Disney movie to receive a Chinese release in a year.

The slump at theatres could also be attributable to the delayed release of several films due to coronavirus concerns in early August, including Bona Film Group Ltd.’s highly anticipated war film “The Battle at Lake Changjin,” originally set for theatrical release Aug. 12, as well as war film “Sharpshooter” and comedy “Five Water Boys.”