By Guan Cong and Luo Meihan 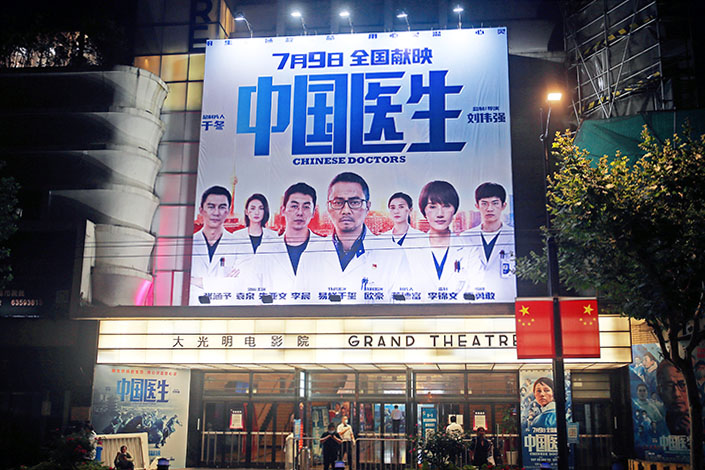 The top film contributed 540 million yuan, or about two thirds of the 844 million yuan in sales by China’s cinemas in the week through July 18, according to data (link in Chinese) from the China Movie Data Information Network. Takings were up 20.5% from the previous week.

“Chinese Doctors,” jointly released by Chinese producer Bona Film Group Ltd., features a group of medical staff combatting the Covid-19 pandemic in Wuhan, the city at the center of last year’s outbreak. It hit Chinese screens on July 9, with a mediocre score of 6.9 out of 10 on popular ratings website Douban as of Tuesday.

But despite lukewarm reviews, it gained momentum to grab the top spot for two weeks in a row. As of Monday, “Chinese Doctors” ranked eighth (link in Chinese) in the year’s annual Chinese box office list, with sales of about 930 million yuan. “Hi, Mom” still leads with its record 5.4 billion yuan in sales this year.

“Chinese Doctors” was directed by Hong Kong’s Andrew Lau who helmed flight mishap thriller “The Captain,” another patriotic movie with total sales of about 1.7 billion yuan during the National Day holiday in 2019.

Bona Film made headlines last June when its vice president and chief of cinema operations Huang Wei died after falling off a building, as the company and the broader film industry suffered under half-year cinema closures due to the Covid-19 outbreak. Cinemas were allowed to resume business last July.

The patriotism-themed “Chinese Doctors” comes as the ruling Communist Party of China celebrates the 100th anniversary of its founding, raising concerns about compulsory ticket purchases by some enterprises and public institutions, especially state-owned.

China’s box office has struggled to rebound amid pandemic flare-ups since late May. Tickets sales during the three-day Dragon Boat Festival holiday in June were not as strong as the two previous public holidays in April and May this year.