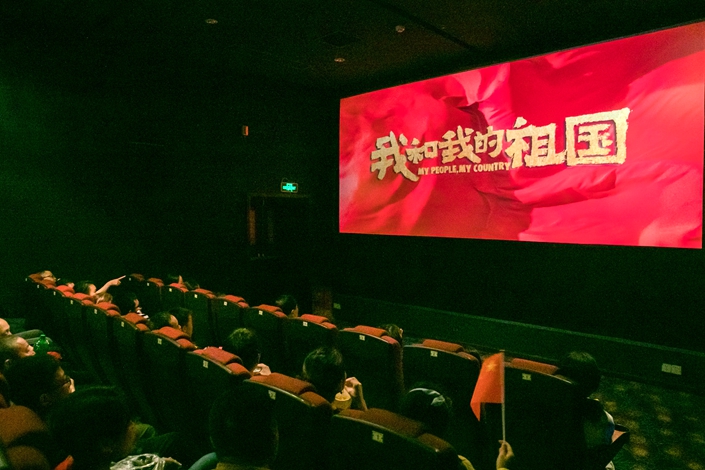 Moviegoers watch "My People, My Country" at a cinema in Chongqing on Oct. 6. Photo: VCG

A trio of patriotic movies pushed China’s box office to a new “Golden Week” holiday record as the People’s Republic of China celebrated the 70th anniversary of its founding.

Chinese people splashed out 4.4 billion yuan ($619 million) at the movies during the seven-day break, more than double the total for last year’s holiday, according to industry data tracker Entgroup.

Three nationalistic titles — “My People, My Country,” “The Captain,” and “The Climbers” — made up 97% of ticket sales and dominated more than 90% of theater screens during the holiday.

A total of 117 million people went to the movies during Golden Week, the first time that figure exceeded 100 million during the holiday, according to Entgroup.

The top box office earner with nearly 2 billion yuan was “My People, My Country,” released by Alibaba Pictures Group Ltd. The movie relates stories that depict the relationship between the country and its citizens based on seven memorable moments since 1949.

It was followed in second place by flight mishap thriller “The Captain,” also released by Alibaba Pictures, which earned about 1.7 billion yuan.

“The Climbers,” released by Shanghai Film Co. Ltd., a tale about climbing Mt. Everest, came in a distant third with 6oo million yuan at the box office.

The strong holiday box office growth bucked a downward trend for China’s movie industry, with ticket sales in the first half recording the first year-on-year decline in eight years.

However, the timely scheduling of patriotism-themed titles in Chinese theaters raised questions about data manipulation at a time of year when corporations and state-owned companies usually purchase tickets for their staff.

As of Wednesday, China’s movie industry had recorded a total of 52.5 billion yuan at the box office this year, creeping closer to last year’s total of 61 billion yuan.