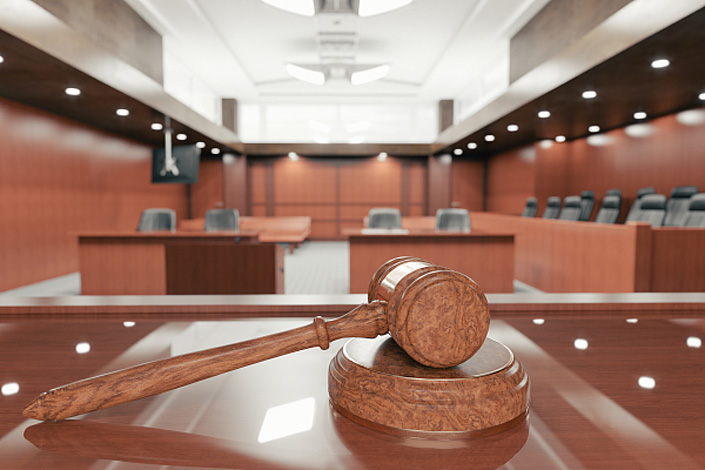 Song Jie awaits a second trial related to the case at an intermediate court in Beijing. Photo：VCG

A former Beijing judge has been sentenced to four years in prison for her wrongful handling of a 2015 case that has since been found to involve a criminal gang which escaped justice by offering bribes to public officials in the law enforcement and court system.

Song Jie, who presided at Beijing Yanqing District Court, was jailed for the crime of “bending the law for selfish ends” by Beijing Changping District Court in April following the first of two related trials. The court determined that Song accepted 78,800 yuan ($12,162) in bribes and made decisions that led to the wrongful sentencing of a defendant who was a scapegoat for a criminal gang.

Another five public officials, including Yu Shuwen, chief judge of Song’s court, prosecutors and police officers who handled the case, were also jailed for taking bribes and abusing power.

Song awaits a second trial related to the case at an intermediate court in Beijing. She appealed the first trial’s verdict on the basis that her handling of the case followed the instruction of her superior, Yu, who decided the sentencing, and examined and approved her judgment.

At the time, Song was not able to independently handle cases without Yu’s approval.

The case reflects a longtime issue in the judicial system, which a 2017 reform to implement “judicial accountability” (link in Chinese) was intended to address. That reform prohibited higher ranking judicial officials, like presidents of courts or chief judges, from examining or approving judgments in cases in which they did not directly participate.

In September 2015, Song was assigned to the case as an assistant judge at Yanqing district court and handed a 10-month jail sentence to a defendant found guilty of injuring a man during a fight.

However, after authorities busted two local gangs in 2019 during a nationwide crackdown on organized and gang-related crimes, the case was retried and officials involved in it were investigated.

Following the crackdown, the gangs’ ringleaders received lengthy jail terms and a local senior police officer, Zhao Linfei, was imprisoned for acting as a “protective umbrella” who sheltered the gangs for years.

According to verdicts, Zhao helped the ringleaders to get favors from local police, prosecutors and judicial officials in their handling of the 2015 case.

Although Song detected issues with the case, she was instructed by Yu to use a quicker ruling procedure and to administer a lenient punishment. Following the judgment, Yu accepted 300,000 yuan in bribes, which he later shared with Song.

The campaign to crackdown on organized and gang-related crimes, which was initiated in 2018, has busted 11,675 criminal gangs, according to official statistics (link in Chinese) released in March. Also, anti-graft authorities have probed into 89,742 cases involving gang crime-related corruption and the “protective umbrella” method of sheltering gangs.