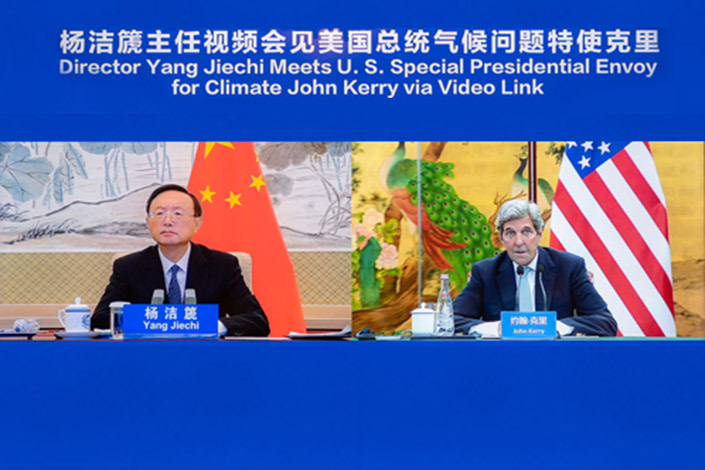 Even as China and the U.S. try to find common ground over climate change, they continue to spar, with Beijing looking to leverage the dialogue to incorporate issues concerning the broader relationship, but Washington insisting on steering well clear of unrelated political matters.

One after the other, top Chinese officials sought to corner visiting U.S. climate envoy John Kerry, who concluded his four-day trip to China on Friday, into discussions covering a wider range of bilateral topics and warned that cooperation on climate could be at risk if Washington did not take steps to improve ties with Beijing.

On the defensive, Kerry, a former U.S. Secretary of State under President Barack Obama, attempted to sidestep by urging that politics be kept out of talks, saying, “climate is not ideological, not partisan, and not a geostrategic weapon,” according to a Reuters report.

Climate change had emerged as one of the few significant issues where there is potential for the world’s two most powerful nations to cooperate in the lead-up to the United Nations’ climate conference later this year in the U.K.

Indeed, high-level talks on the topic seemed to offer a sliver of hope for improving overall China-U.S. relations, which remain tense as U.S. President Joe Biden has largely maintained the same hawkish approach towards China of his predecessor, Donald Trump.

These have included the Biden administration imposing sanctions on Chinese officials over Hong Kong, ramped up military activities in the South China Sea, increased support to Taiwan and strictly limiting Chinese students’ access to study advanced technology in the U.S. All of these have been viewed by Beijing as “a series of erroneous actions” that have worsened bilateral ties.

Yet despite the seemingly intractable nature of these issues, China has adopted an open mind to the possibility of rapprochement, suggesting the tabling of additional matters of common concern to the two superpowers, albeit while appearing to lay the blame for current tensions at Washington’s feet.

Yang Jiechi, a member of the Politburo and China’s highest ranking diplomat, told Kerry in a virtual meeting on Thursday that China is open to dialogue and pragmatic cooperation with the U.S. on a broad range of issues including climate change, pandemic control and economic recovery, according to the official Xinhua news agency.

But while seeking to expand the dialogue beyond just climate issues (link in Chinese), Yang tempered it with a rebuke, saying that “for some time China-U.S. relations have faced severe difficulties due to a series of erroneous acts by the United States to interfere in China's internal affairs and undermine China's interests.”

“China is strongly opposed to and even more resolute in countering such practices,” he said.

On Wednesday, Chinese Foreign Minister Wang Yi preceded Yang’s comments with a warning to Kerry, saying essentially that refusing to play ball on talks about other issues related to the overall relationship could jeopardize bilateral climate change cooperation.

“The U.S. side wants the climate change cooperation to be an ‘oasis’ of China-U.S. relations. However, if the oasis is all surrounded by deserts, then sooner or later, the ‘oasis" will be desertified,” Wang said according to Xinhua.

“China-U.S. cooperation on climate change cannot be divorced from the overall situation of China-U.S. relations,” he said.

Wang added that the Biden administration should “attach importance to and actively respond to Beijing’s so-called ‘two lists’ and ‘three bottom lines,’ which include the U.S. treading lightly on matters related to Taiwan, Hong Kong and the South China Sea, respecting China’s sovereignty and security, and stop interfering in its internal affairs while taking concrete steps to improve bilateral ties.

Having made his plea to stay away from politics, Kerry remained largely on script during his trip, highlighting the “importance of U.S.-China cooperation to reduce global emissions and raise global climate ambition,” during his meeting with Yang, according to a State Department spokesperson.

Kerry “underscored there is no way for the world to solve the climate crisis without the full engagement and commitment of the PRC,” according to the spokesman.

On that core topic, China and the U.S., the world’s two largest carbon emitters, have plenty to talk about. On that front, China has pledged to peak its carbon emission before 2030 and then reach a net-zero emission level by 2060, while Biden has doubled the U.S. commitment to reduce greenhouse gas emissions by up to 52%.

Kerry left China on an upbeat note, with China’s Ministry of Environment and Ecology saying in a Friday statement that the two sides would continue bilateral talks on climate change to facilitate the success of global talks in Glasgow in November.