China Powers Up Pilot Program for Trading in Green Electricity 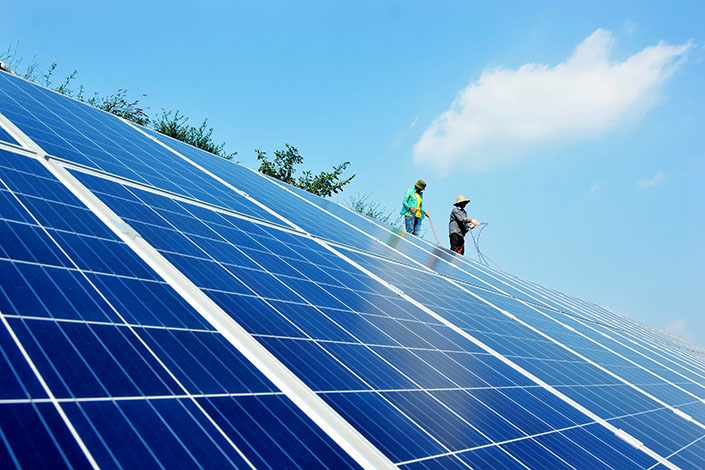 The program is one of China’s latest steps to realize its goal of bringing the amount of carbon dioxide it releases into the atmosphere to a peak by the end of the decade. Photo: VCG

China has kicked off a nationwide pilot program to trade green power, in a bid to encourage renewable energy consumption to support the country’s low-carbon transition.

The program, launched Tuesday, permits electricity generators to sell green power directly to end-users. Previously, China did not have such a system to trade green power.

“(The project) aims to guide consumption of green power in a market-oriented way, which will reflect its environmental value,” a spokesperson of the National Development and Reform Commission (NDRC), China’s top economic planning body, said in a statement released Tuesday (link in Chinese). “Revenue generated through the (program) will be used to support the development and use of green power to better promote the creation of a new power system.”

Under the program, a total of 259 market entities in 17 provincial-level regions across the nation traded 7.9 billion kilowatt-hours of green electricity (link in Chinese) on Tuesday, the state-run Xinhua News Agency reported. The trading took place (link in Chinese) at the Beijing Power Exchange Center and the Guangzhou Power Exchange Center. The green electricity traded is estimated to emit 6 million tons less carbon dioxide than coal-fired power, the report said.

The program mainly involves wind and solar power at the moment, and will gradually expand to other renewable energy such as hydropower, the NDRC spokesperson said.

The program is one of China’s latest steps to realize its goal of bringing the amount of carbon dioxide it releases into the atmosphere to a peak by the end of the decade and to net zero by 2060, a target that climate experts see as crucial for mitigating the worst effects of global heating and climate change.

Before the launch of the nationwide program, trials of similar trading activities had been taking place in some regions of the country, including the capital Beijing, its neighboring city of Tianjin and the surrounding province of Hebei.