Offering a Bribe Could Soon Get You Blacklisted in China 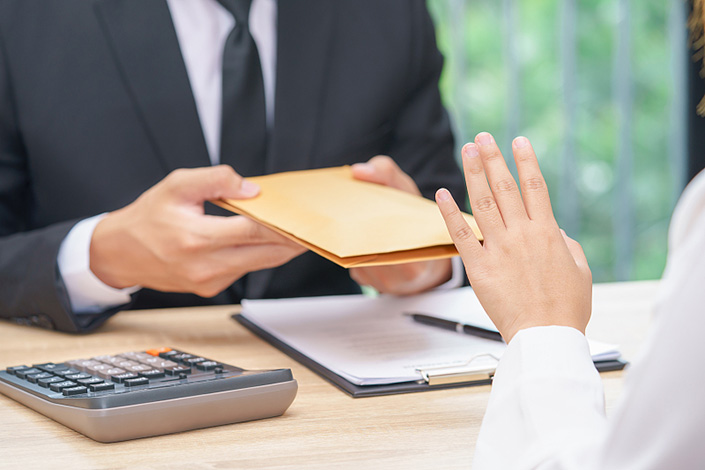 China’s top corruption watchdog has been compiling a blacklist of those who have offered bribes and will work with other authorities to consider appropriate punishments. Photo: VCG

Chinese authorities plan to “blacklist” people who offer bribes amid an ongoing corruption crackdown that has swept from government agencies to enterprises, according to new guidelines published Wednesday.

In the guidelines, the Central Commission for Discipline Inspection (CCDI) and the National Supervisory Commission, along with five other top authorities including the Supreme People’s Court, highlight the importance of preventing people from offering bribes, and vow to promote joint investigations (link in Chinese) into the illegal practice.

The country’s top corruption watchdog has been compiling a blacklist of those who have offered bribes (link in Chinese) and will work with other authorities including personnel departments to consider appropriate punishments, a CCDI official told the China Discipline Inspection and Supervision Paper. The purpose is to improve the “comprehensive” effectiveness of combating bribe-paying, the official said.

Authorities are being told to “firmly” investigate and deal with bribery, especially repeated instances, major cases and bribes offered to multiple people.

Some four million government and party officials across China have been punished for graft since the launch of President Xi Jinping’s nationwide anti-corruption dragnet in 2012, the CCDI deputy secretary Xiao Pei said at a press conference in late June.

The bribery investigation will target party members and state employees, and focus on occurrences in major national works and projects, as well as fields such as environmental protection and finance, and “major commercial bribery.”

The investigation endeavors to foster a “healthy” social environment for economic development, build “fair” ties between government and business, and protect enterprises’ legitimate rights and interests, the CCDI official said.

Illegal property interests derived from bribery shall be confiscated, recovered or ordered to be refunded according to the law, while others improperly obtained, such as job titles, business qualifications and academic degrees, should be cancelled or revoked, the guidelines said.

The guidelines have urged local discipline watchdogs and prosecutors to “severely” punish those offering bribes.

Late last month, the eastern city of Hangzhou launched a campaign, urging nearly 25,000 local officials to examine and rectify their behavior to prevent business-related conflicts of interest and illegal lending.