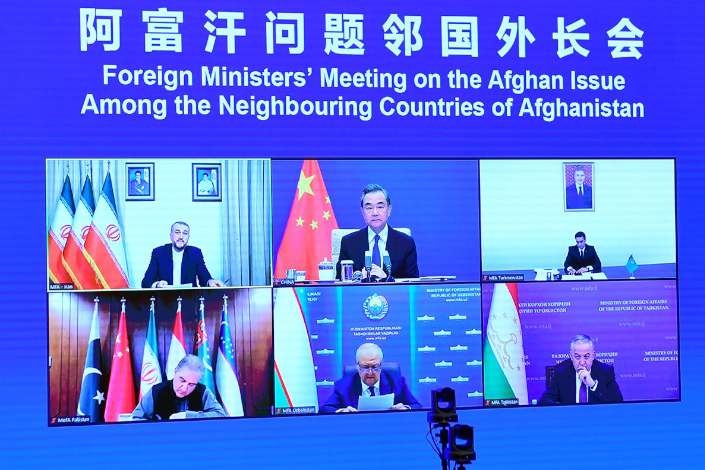 China plans to provide 200 million yuan ($31 million) of humanitarian aid to Afghanistan in the form of food, winter items, vaccines and medicines, China’s foreign minister said at a Wednesday video link meeting with his regional counterparts.

Wang Yi made the announcement as he suggested areas in which the countries could coordinate and cooperate on Afghan issues, according to a statement from the foreign ministry.

China has decided to donate a first batch of 3 million doses of Covid-19 vaccines to Afghanistan and is also willing to provide more materials to help the country with pandemic prevention and control, he said.

The meeting was attended by foreign ministers from Afghanistan’s neighbors — Pakistan, Iran, Tajikistan, Uzbekistan and Turkmenistan. On Tuesday, the Taliban announced a new interim government and cabinet, with senior Taliban leader Mohammad Hasan Akhund as acting prime minister, according to media reports.

However, Afghanistan’s future still faces “a lot of uncertainties,” Wang said Wednesday, and neighboring countries should “exert a positive influence on the situation’s development.”

“Afghanistan’s neighbors should play a unique role in addressing their own legitimate concerns and providing a good external environment for Afghanistan’s stability and reconstruction,” he said.

Apart from the planned humanitarian aid, Wang said that once security and other conditions allow, China is also willing “to help Afghanistan build projects that will contribute to improving people’s livelihood, and support peace reconstruction and economic development of Afghanistan within its capacity.”

The neighboring countries should also work together to keep border ports open, strengthen management and control of refugees and migrants, and cooperate on counterterrorism and drug control, Wang said.

He also called on the U.S. and its allies to “assume their due responsibilities,” criticizing them as “the culprits of the Afghan issue.”

“The United States and its allies should take primary responsibility for addressing the issue of Afghan refugees and migrants, while providing countries that are in a position and willing to host Afghan refugees with necessary compensations,” he said.

On Wednesday, U.S. Secretary of State Antony Blinken and German Foreign Minister Heiko Maas also hosted a meeting on Afghan issues with allies and partners, including representatives of Australia, Canada, Japan, Uzbekistan and NATO, according to a readout issued by the U.S. State Department.

Blinken urged unity among the allies and partners “on holding the Taliban accountable on counterterrorism, on allowing safe passage for foreign citizens and Afghans who want to leave, and on forming an inclusive government that respects basic rights,” the statement said.