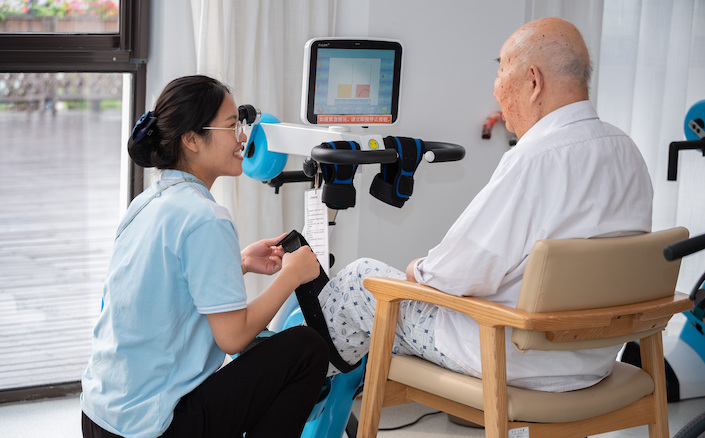 A senior nursing home in Nanjing.

Here are four things to know about how the National Pension Insurance Co. will be established and what role it will play in China’s three-pillar pension system.

Why did China set up the new pension company?

China operates a three-pillar pensions system that is heavily dependent on the first pillar, a basic state pension program for urban and rural residents and employees. It is managed by provincial-level governments. The state pension system held a reserve of 7.8 trillion yuan as of the end of 2018, accounting for about 80% of total pension funds in China.

As in many countries, the state pension system has been slowly but steadily moving toward a funding crisis, a concern exacerbated by recent census data. The state pension fund will run out of money by 2035 amid a decline in the available work force, according to a government-supported think tank.

The second pillar consists of funds that employers put into enterprise annuities and occupational annuities. Since companies and individuals already pay sizable contributions to the government program, employers have little incentive to develop corporate annuity benefits.

Third-pillar funds are private, personal insurance policies, still at a nascent stage. Uptake of the third pillar is extremely low, accounting for 1.25% of total pension assets. Expanding the third pillar is an important goal for alleviating pressure on the state pension fund.

The new national pension company will serve as an important component of China’s third-pillar blueprint. It aims to convert large amounts of people’s shorter-term savings into longer-term pension products that are relatively safe and generate higher returns.

Under the 14th Five-Year Plan, the government set out to further expand coverage of the basic state pension insurance system, encourage the growth of the occupational pension and private pension sectors, and delay the legal retirement age.

Who will fund the new pension company?

The company has registered capital of 11.15 billion yuan and will be based in Beijing.

Seventeen financial institutions will take stakes in the pension company. The wealth management units of China’s big five banks are each investing 1 billion yuan for an 8.97% stake, the Insurance Association of China said last month.

Who will lead the company?

Ye Haisheng, director of the Capital Account Management Department at the State Administration of Foreign Exchange (SAFE), was proposed as chairman of the new pension company, according to the China Banking and Insurance Regulatory Commission (CBIRC). He previously held positions at the Economic Restructuring Office of the State Council.

Huang Tao, currently a vice president of the Bank of Shanghai, will be named general manager. Huang, 50, is a veteran banker who held various executive positions at China Construction Bank. He received an MBA from the University of Oxford.

What to watch for next?

The market is carefully watching the type of products the company will offer and what their advantages are compared with existing pension products. For example, do its investment products provide a higher return? Will there be a mandatory policy to force people to invest?

All companies offering commercial pension insurance products are participants in the third-pillar market. But only those approved by the CBIRC can benefit from certain preferential treatments such as deferred taxes. The market also hopes that the new company will fill gaps in the market instead of competing with existing players. The preferential policies and tax arrangements the new pension company will get are also under close market scrutiny.

The new pension company potentially faces competition from foreign insurers. Huang Hong, the CBIRC vice chair, said the commission supports foreign investors setting up pension insurance companies in China. Heng An Standard, a joint venture of Standard Life Aberdeen and Tianjin TEDA International, received CBIRC approval to set up a pension insurance company, but there is no word of approval by the Ministry of Human Resources and Social Security, which is responsible for regulating the investment scope of annuity funds.