Wang Tao: China’s Trade Numbers Surprise, But Their Strength Might Not Last 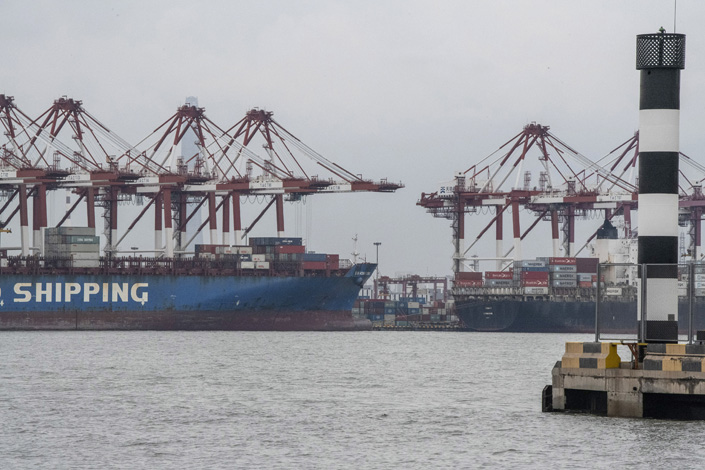 Containers get loaded onto freighters Sunday at Tianjin Port in Tianjin. Photo: VCG

These accelerations of year-on-year export growth rates in August led to the larger positive gaps between the current shipment levels to the key destinations and their 2019 bases. Export shipments to the U.S. remained at 38.6% higher than 2019 level vs. 27.6% in July. Those to the EU stood at 45.3% above the 2019 level in August versus 32.4% in July.

The acceleration of shipment growth to the U.S. is consistent with the improvements seen in the U.S. ISM manufacturing PMI new orders. In August, exports to the EU contributed 4.5 percentage points to export growth, 1.8 percentage points higher than its July contribution. At the same time, the headline trade export growth went up by 6.4 percentage points. Thus, EU contributed around 28% of the export growth acceleration while its export share is 16%. This is consistent with the growth strength in the eurozone as observed by our European economics team. This is also consistent with what we highlighted earlier on, as the U.S. consumer recovery shifting to more survey demand driven, exports to the EU is playing a bigger part in driving China’s export growth. Another destination that made large contribution to export growth acclamations is South Korea. With around a 4% export share, shipment to the country contributed 11% of the export growth accelerations in the month. South Korea’s solid growth performance and further fiscal spending may be supporting higher demand growth for China’s exports.

Key commodities drove more than half of the import growth accelerations

A commodities basket, including iron ore, copper ore, coal, crude oil petroleum products, steel and copper products, recorded an export value growth at 59.3% year-on-year in August versus 46.5% in July. This key commodity basket forms around 22% of China’s import value. It contributed 13.1 percentage points to the overall import growth in the month, 2.6 percentage points more than its contribution in July. The key commodities basket contributed around 52% of the import value growth accelerations between July and August.

Other than the key commodities, the import value growth of information technology components remained largely unchanged at more than 20% year-on-year, while the import volume growth of integrated circuits accelerated by 7 percentage points to 26% year-on-year. Import value growth and volume growth of display panels both accelerated. These are consistent with the fact that the factories are preparing the new smart phone launches in the coming month. It is also worth noting that, the import volume of machine tools picked up again to 17% year-on-year in August, from 3% in July. This continues to support our previous view that corporate capital expenditures in China remain strong.

Softening external new orders in general, headwinds could re-emerge ahead

The Chinese mainland’s NBS PMI new export orders index stayed below the 50-benchmark for the fourth month in a row, falling another 1 point to 46.7, marking the weakest reading since June 2020. This mirrors an overall moderation in new order measures of external economies, despite an uptick in the U.S. data.

In net, the external orders development seemed to be carrying over the moderating stream in August. However, China’s August export growth accelerated. Given the diffusion index nature of the new orders survey, it is not easy to bridge the marginal changes of new orders with actual monthly export shipment. The fact that the DM new orders index still remains at high level, the growth differentials across different product mixes, as well as some rerouting impact may offer the explanations to the gap between the improved export shipment and the weakened survey data. That said, continued weakness in survey data and the high statistical base may still bring challenges to China’s export growth rates in the coming months. The return of production from other economies may also put downward pressure on export growth through reshuffling orders away as well as weakening demand for Covid-related products.

Wang Tao is the head of Asia economics and chief China economist at UBS Investment Bank. The article was edited for length.