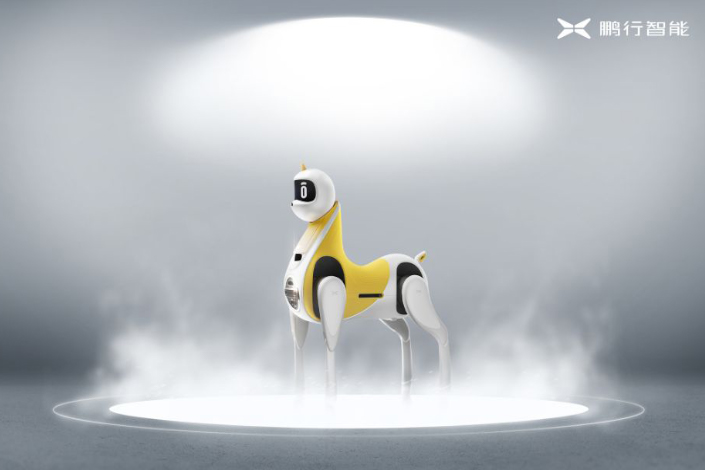 Xpeng released a computer-animated video of the robot pony playing with a little boy, without providing details on when the product will hit the market and how much it will cost. Photo: Xiaopeng.com

Tesla wannabe Xpeng gives a peek at its robotics ambition

Powered by a car-grade smart driving system made up of cameras and laser radars, the quadruped robot horse, named Little White Dragon, will be able to detect obstacles and plan routes, Xpeng said in a WeChat post on Tuesday. The robot pony will also feature motion control, facial recognition and emotional and voice interaction capabilities.

The Guangzhou-based startup only released a computer-animated video of the robot pony playing with a little boy, without providing details on when the product will hit the market and how much it will cost.

“Xpeng will expand its capabilities in autonomous driving, voice recognition and smart manufacturing to the field of robotics,” Xpeng CEO He Xiaopeng said on the microblogging platform Weibo. He added that the company’s first goal is to build a low-speed rideable robot pony for use in transportation.

Lotus Cars Ltd., a British sports car brand majority owned by Chinese automaker Zhejiang Geely Holding Group Co. Ltd., plans to start production at its new factory in the central Chinese city of Wuhan in 2022 and open up to 70 showrooms across the country by 2024.

That was the message from CEO Feng Qingfeng during a telephone interview with Reuters on Tuesday, when he said the Wuhan facility, which is still under construction, will have an annual production capacity of 20,000 compact SUVs by 2023. It's part of the firm's efforts to better compete with German rival Porsche, which sold 88,968 cars in China last year thanks to the demand for its Macan SUVs.

Feng told Reuters that Lotus will first open more than 20 showrooms next year in megacities like Beijing and Shanghai, with plans to expand the network to include smaller cities like Suzhou and Ningbo by 2024.

Rivai, a Shenzhen-based firm that develops system-on-a-chip (SoC) for Internet of Things (IoT) devices, said on Wednesday that it has raised tens of millions of dollar in a series A+ funding round co-led by TikTok owner ByteDance and Hillhouse Capital’s GL Ventures.

Proceeds from the round, which was also joined by investors including Lenovo Capital, Baidu Ventures, ZhenFund and Wu Capital, will be used for product development and talent recruitment, according to the company.

Founded in 2018, Rivai uses the open-source instruction set architecture RISC-V to develop SoC for wearables, smart home products and consumer electronics connected to IoT and Artificial Intelligence of Things (AIoT), according to its website.

The funding effort comes against the backdrop of the Chinese government striving to domestically produce 70% of its semiconductors by 2025. That's part of a broader plan to attain global leadership in manufacturing in high-tech industries like artificial intelligence and information technology.

Geely Automobile Holdings Ltd. said on Tuesday that it will invest $50 million in Hangzhou-based smart car tech startup Ecarx in exchange for a 1.51% stake in the latter company, as traditional carmakers and tech firms increasingly team up to build intelligent connected vehicles.

In a statement, Geely said that Ecarx’s businesses are in line with its long-term strategy to build a smart car technology ecosystem that will include cockpit systems, vehicle chips and autonomous driving solutions.

In June, Geely announced a deal with Ecarx which will allow Geely’s new Xingyue L model to be the first to use a smart cockpit system that Ecarx has co-developed with Michigan-based car part supplier Visteon and U.S. chipmaking giant Qualcomm. The system will allow drivers to interact with various in-car devices such as an AI-enabled voice assistance system and an infotainment system.

Swedish telecoms equipment maker Ericsson will close a research center in the eastern Chinese city of Nanjing with plans to transfer the redundant employees to its partner TietoEVRY, a Finnish software provider that has offices in the Asian country, the South China Morning Post (SCMP) reported on Thursday, citing sources familiar with the matter.

The SCMP said Ericsson, which currently has four other research centers in Beijing, Shanghai, Guangzhou and Chengdu, has confirmed the arrangement, saying in an email statement that it will divest it product research and development activities in Nanjing to TietoEVRY effective November 1, with all affected employees being able to get hired by the Finnish partner.

The news comes two months after Ericsson said its revenues from the Chinese market nosedived nearly 60% year-on-year in the second quarter of this year amid rising tensions with Beijing angered by the Swedish government’s move to ban Huawei equipment from its 5G network.

A pair of Tencent titles claimed the top two spots in the ranking of the world’s highest-earning mobile games for August, as the Chinese tech giant is rattled by a new regulatory squeeze that limits time spent by underage gamers playing online games to no more than three hours a week.

Last month, “PUBG Mobile” pocketed $270 million in revenue, up 4.7% year-on-year, maintaining its position as the world’s highest-grossing mobile game, according to SensorTower. More than 60% of the game’s monthly revenue came from the Chinese mainland, with the U.S. and Turkey being the second- and third-largest revenue sources with 9% and 6.5% respectively.

“Honor of Kings” took the second spot with revenue of $256.2 million, about 95% of which came from the Chinese mainland, followed by Taiwan with 2%, said SensorTower.

Global gamers spent a total of $7.7 billion on mobile games available on Apple’s App Store and Google Play in August, up 8.6% year-on-year, according to SensorTower.

JD.com-backed delivery platform Dada Group reported widening losses in the second quarter, despite a jump in revenue, as it doubles down on its autonomous delivery service to enhance efficiency and reduce costs.

In the three months through June, the Shanghai-based company’s net loss attributable to ordinary shareholders swelled to 640.4 million yuan ($99.1 million) from 617 million yuan a year ago, even as total revenue grew 11.5% year-on-year to 1.5 billion yuan, according to its earnings report published Tuesday. In July, Dada officially launched a platform for its autonomous delivery service, a move that CEO Philip Kuai said will help the company “significantly reduce the cost of delivery” in the long run.

Chinese artificial intelligence company Megvii Technology Ltd. won approval for its IPO on Shanghai’s Nasdaq-style STAR Market, according to an announcement published on Thursday by the high-tech board’s listing committee. However, the panel required the company to elaborate on where its core competitiveness lies and what it will do next to protect its China-based investors’ rights and interests in accordance with the local laws and regulations.

In an updated listing prospectus last week, ten-year-old Megvii said that it aims to raise about 6 billion yuan ($932 million) in the planned IPO, which will be used to fund construction of a R&D center, development of its AI vision internet of things solutions and smart robots, its sensor design, as well as supplement its working capital.

In February 2020, Megvii, which has yet to turn a profit, let its Hong Kong IPO application lapse after being placed on the U.S. Entity List in October 2019.