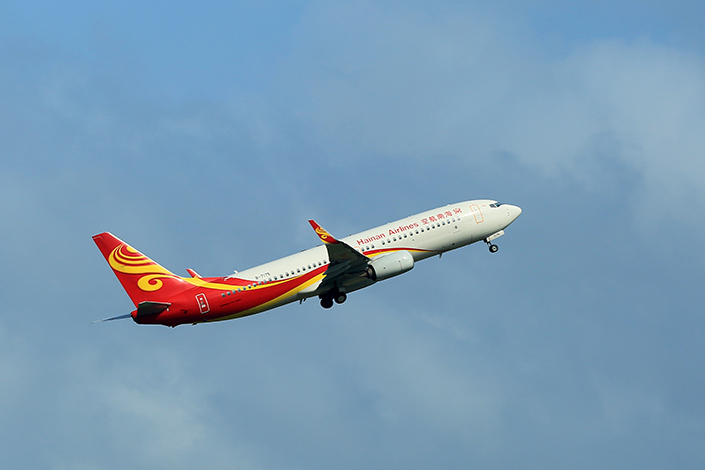 A Hainan Airlines plane takes off from an airport in South China’s Guangdong province on July 3. Photo: VCG

No further details of the strategic investments were offered.

HNA’s creditors petitioned a court for it to begin a bankruptcy restructuring in January. Under a plan subsequently worked out by a government-appointed task force, the company is still seeking strategic investors for the retail businesses, including Shenzhen-listed CCOOP Group Co. Ltd. (000564.SZ) and stakes in Hong Kong-listed China Shun Ke Long Holdings Ltd.

Investors for its retail businesses will be announced soon, a source close to the matter told Caixin.

Founded in 1989 as a state-owned airline before becoming a privately controlled joint-stock company in 1992, HNA is fourth-largest airline group in China and operates Hainan Airlines, Tianjin Airlines, and Beijing Capital Airlines.

By the end of 2017, the firm’s assets had ballooned to 1.23 trillion yuan with total debt of 740 billion yuan. The company’s debt-fueled acquisition strategy had a hard landing after the government tightened financing rules and oversight for overseas asset buying in 2017.

HNA will be holding its second round of meetings with creditors on Sept. 27 and Sept. 30, the notice reads.