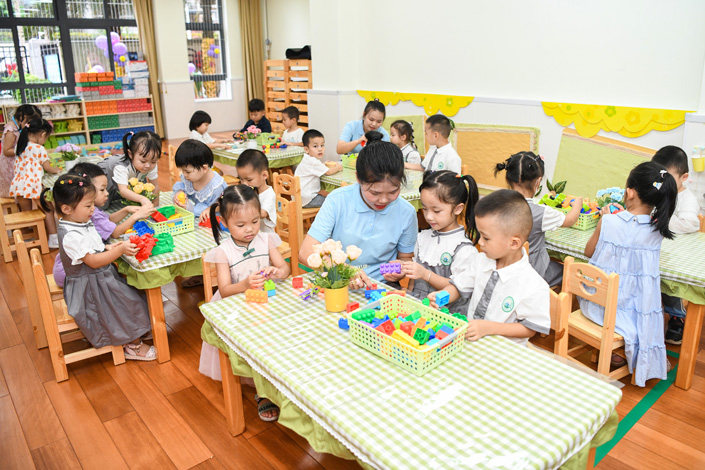 Many Chinese kindergartens, mostly privately run, are facing difficulties in enrolling enough students as fewer babies have been born in recent years, according to official statistics and interviews conducted by Caixin.

As the new academic year begins, kindergartens in Beijing are struggling to fill preschool classrooms. According to the online platform for kindergarten enrollment, 136 kindergartens in the city’s Chaoyang district, of which over 80% are privately run, still have vacant spots that need to be filled.

Most children who are enrolling in kindergartens this year were born in 2018. According to the Beijing Health Commission, the city had about 30,000 fewer newborn babies in 2018 compared to the previous year.

Kindergartens in many other cities have been facing the same problem in recent years. Since 2016, the national birth rate has declined for four straight years. Last year, China registered 12 million newborn babies in 2020, with a record low total fertility rate of 1.3 for women of childbearing age, far lower than the anticipated rate of 1.8.

Last year, private kindergartens in China enrolled 853,600 fewer children than the previous year, a year-on-year decrease of 9.44%, according to the education ministry. The total number of children in kindergartens also dropped more than 2.7 million, a decrease of 10.22% from the number in 2019.

Several kindergartens in Beijing contacted by Caixin said they still have vacant spots and are available for enrollment. A staff member responsible for student admission at a Beijing kindergarten said the two classes that each have 25 spots have only enrolled 18 and 19 new students, respectively.

In megacities like Beijing, amid the effects of the pandemic and policies that put restrictions on migrants, many migrant families with children have left the city, the head of a Beijing private kindergarten told Caixin. Most migrant families choose to send their children to “inclusive private kindergartens” which are given government subsidies so they can offer affordable preschool education.