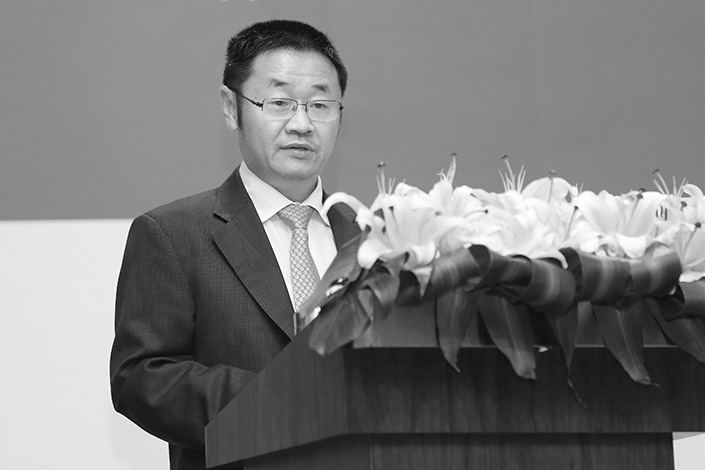 A former senior official at China’s top securities regulator, who was also an iconic figure in China’s largest stock market crash in the last decade, passed away recently. For many people in the market, Zhang’s death closes a unique chapter in the history of the country’s capital market.

Zhang Yujun, a former assistant chairman of the China Securities Regulatory Commission (CSRC) and ex-boss of the Shanghai and Shenzhen stock exchanges, died of pancreatic cancer at Shanghai’s Ruijin Hospital, sources with knowledge of the issue told Caixin, without specifying the date. He was 58.

Zhang is remembered by many market participants for his role in handling the historic stock market meltdown in 2015, when the benchmark Shanghai Composite Index (SCI) nosedived more than 40% from June 12 to Aug. 26. Zhang had enormous power in leading the state rescue team to bail out the market. But the savior soon became a suspect. Since September 2015, he had been under a corruption investigation.

From late 2014 to mid-2015, the Chinese mainland stock market continued a rapid surge that was largely fueled by highly leveraged investors using borrowed money. The SCI jumped 60% from the end of 2014 to a peak in June 2015.

Amid the market surge, Zhang and his colleagues took tough action (link in Chinese) to curb leveraged speculation — especially retail investors buying stocks with borrowed money from unlicensed lenders — which some researchers later argued was a trigger (link in Chinese) of the subsequent meltdown.

On June 12, 2015, the CSRC said that it had ordered securities firms (link in Chinese) to cut off access to unlicensed lending for stock purchases, causing the SCI to slump 13% in the following five trading days. Forced sales by highly leveraged trading accounts made the matter worse — as stock prices fell, the accounts had no choice but to sell up to pay back the debt used to buy them, pushing prices even lower and triggering more forced selling.

In the wake of the market crash, financial regulators stepped in and assembled a “national team” of state-backed entities to buy stocks to prevent a further meltdown. Zhang was one of the four officials who led the CSRC’s rescue efforts.

Two of the four fell from power shortly after the market turmoil due to corruption investigations, including Zhang.

Another member of the team, CSRC Vice Chairman Yao Gang, was removed from his position following the market crash, also for alleged violation of party rules. In 2018, he was sentenced to 18 years in prison for bribery and insider trading.

It remains unclear whether the investigations into the two were linked to their work during the crash.

Before the probe into him, Zhang appeared to have a promising future. After starting his career at the central bank, Zhang spent more than 10 years working as president of the Shanghai and Shenzhen stock exchanges, making him the only person to take the position at both bourses. He was appointed assistant chairman of the CSRC in September 2012.

After the 2015 stock market meltdown, rumor even had it that Zhang would be promoted to deputy governor of the central bank.

Liu Caiping and Li Qing contributed to this report.