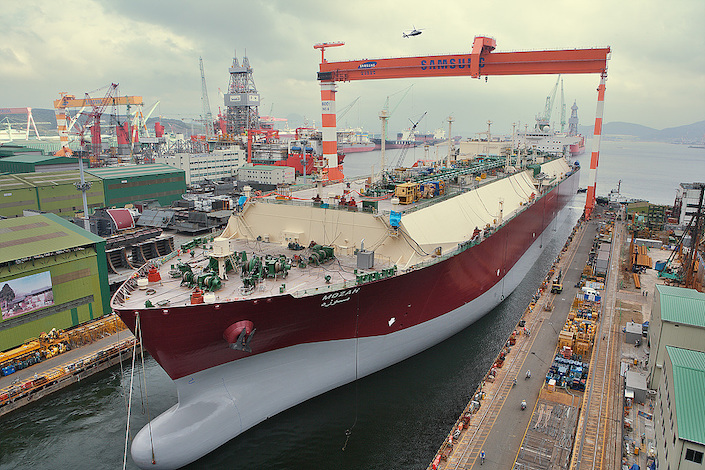 Samsung Heavy Industries (Ningbo) Co. Ltd. plans to terminate staff and shut down the operation by the year end, the world’s third-largest shipbuilder said Monday. Thousands of workers gathered at the site, demanding more severance pay, according to video clips provided by workers. In a letter to employees, the company said the Covid-19 pandemic caused serious difficulties for the business.

The closing takes place amid a seismic shift in Asian shipbuilding. Since 2019, the South Korean government has laid out plans to revive the country’s shipbuilding and shipping industries. It promoted the merger of Hyundai Heavy Industries and Daewoo Shipbuilding to create the world’s largest shipbuilder. South Korea in on track to overtake China in shipbuilding orders in the second half of this year, shipping services provider Clarksons PLC estimated in a report on the global shipping market.

Samsung’s Ningbo operation, established in 1995, was the first Chinese shipyard in which the South Korean giant invested. It was also the first wholly foreign-owned shipbuilder in China. At its peak, the yard had 4,800 employees with an annual shipbuilding capacity of nearly 300,000 tons. The unit manufactures ship blocks, or modules that are later assembled in South Korea into complete ships.

Samsung Heavy Industries has long considered withdrawing from the Ningbo investment. The company embarked a year ago on moving ship block manufacturing back to South Korea, according to an analyst at Lloyd's Register of Shipping.

Samsung Heavy Industries has suffered losses for six consecutive years. For 2021, the company set a target of $7.8 billion in new ship orders and said it expects to achieve 7.1 trillion won ($6.35 billion) of consolidated operating revenue, up from 6.86 trillion won in 2020.

The materials used in the Ningbo shipyard were originally imported from South Korea under a system that allows such goods to enter China without duties. Completed ship modules were exported to Samsung’s shipyards in South Korea for assembly. Under this model, the Ningbo operation generated high profits for Samsung.

As South Korean legislation requires the protection of domestic shipbuilding technology, the Ningbo plant could make only traditional ship models, while the South Korean inbound export model is more suitable for production of high value-added products such as liquefied natural gas carriers.

However, many employees who worked in the Ningbo shipyard for more than 10 years said they are not satisfied with the N+3 plan. Many of them suffer from hearing impairment, lower back issues, knee injuries, excessive inhalation of benzene and other occupational ailments commonly found among heavy-industry workers. They said they think the compensation standard is too low.

Samsung still has some ship blocks under construction at the Ningbo shipyard, but workers are taking strike actions. Equipment at some facilities that is no longer needed is being dismantled and transferred to another Samsung shipyard in Rongcheng, Shandong province, along with new orders.

The Ningbo yard is in a chemical industry zone. The local government is adjusting its policies to promote the chemical industry, and chemical companies are interested in the 200 acres occupied by the shipyard, the former Samsung executive said. Local authorities also hope to attract industries that will generate more tax revenues, the executive said.

Samsung held merger talks with another Chinese shipbuilder, but the parties failed to reach an agreement because of trademark issues, the former executive said.

The Ningbo government signed an agreement with Samsung to take back the shipyard land, according to a statement by the local government. The government said in August it was taking over the land as part of a cleaning plan for the Qingzhi Chemical Industrial Park as certain nonchemical enterprises in the park don’t fit with current national industrial policy and there is a significant potential safety hazard.