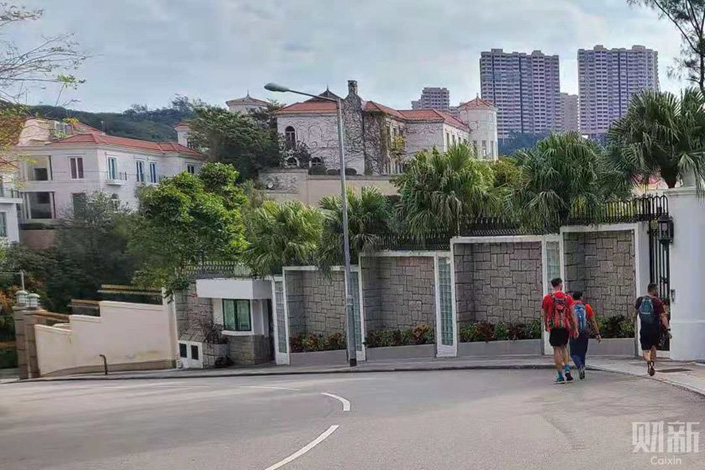 The chairman of troubled China Evergrande Group, Hui Ka Yan, has stepped down as director of a company that owns a luxury house in Hong Kong, public records show.

The move is being closely watched by Evergrande creditors as the Hong Kong-listed real estate giant is struggling to raise cash to repay a huge pile of debts, some of which it has defaulted on. Some creditors have applied for courts to freeze its assets.

The property is located on Hong Kong Island’s Black’s Link trail, along which there are wealthy communities with a number of similar villas and expansive views. Its value is estimated at about HK$800 million ($102.8 million), according to market watchers.

Hui owns the house as sole shareholder of Giant Hill Ltd., a situation not uncommon in Hong Kong where many rich people own property through companies.

He resigned as sole director of the company on July 30 and Tan Haijun took over the role, according to records from the Companies Registry of the Hong Kong government. Hui remained as shareholder as of Thursday.

The relationship between Hui and Tan is unclear. Local media HK01 reported Tuesday (link in Chinese) that Tan is the butler in Hui’s house.

The personnel change is seen by industry experts as an attempt to make it easier for Hui to deal with the offshore asset as he lives on the Chinese mainland. It can give Hui more flexibility, as Tan now has the right to handle the company’s operations, such as pledging the property for loans or even selling it, a real estate agent specializing in luxury properties commented.

Also on July 30, Tan became a director of another company that owns a property neighboring the aforementioned house. It is unclear who owns this company, but HK01 wrote, citing anonymous sources, that it belongs to people related to Evergrande. The property is estimated by market observers to be worth about HK$700 million.

In recent months, debt-ridden Evergrande has been embroiled in a worsening liquidity crisis. It has defaulted on suppliers’ bills and retail investors’ wealth management products, and in recent days, has been inundated by investor protests.

In a Monday statement (link in Chinese), Evergrande said it is facing “unprecedented hardship” while denying rumors that it is undergoing a bankruptcy restructuring.

The company has been selling multiple assets to raise cash to ease the liquidity crunch. It has recently planned to sell equities in two Hong Kong-listed units: an electric-car maker and a property manager.