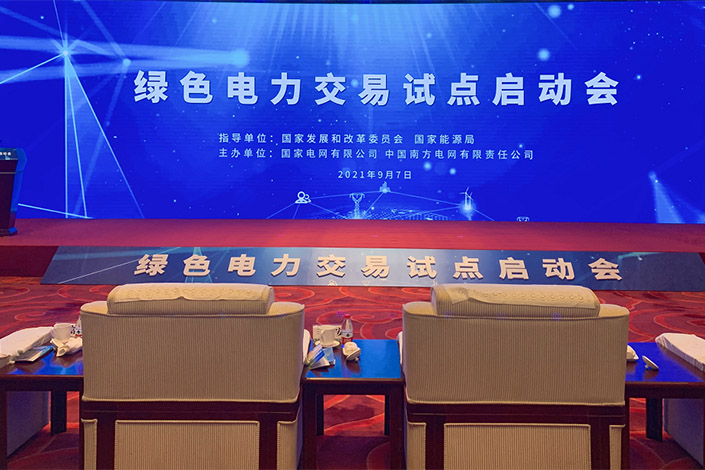 China’s top coal producers have sworn to buy more green energy through the country’s recently launched trading program, which aims to support the transition away from energy sources which fuel climate change — such as coal.

The national program, which started operating on Sept. 7, allows electricity generators to sell green power directly to end-users. A spokesperson for China’s top economic planner previously said the program mainly involves wind and solar power at the moment, and will gradually expand to other renewable energy sources such as hydropower.

That day, a total of 259 vendors in 17 provincial-level regions traded 7.9 billion kWh.

The market is likely to operate as a monthly event, said a source inside Beijing Electric Power Trading Center, one of China’s two power trading exchanges.

Overall, the power traded via the program costs between 0.03 yuan and 0.05 yuan per kWh more than on the country’s similar markets for all electricity.

The idea behind separating green power from the general market is to help offset the high cost of developing the country’s new energy infrastructure, said Lian Weiliang, deputy director of the National Development and Reform Commission.

Next year should see between 20 and 30 billion kWh of green power sold on the market, and trading volume could grow to over 100 billion kWh annually after the EU carbon border tax goes into trial in 2023 and is officially launched in 2026, Sinolink Securities Co. Ltd. Chief Analyst Li Rong told Caixin.

The trading program is one of various initiatives to support China’s plan to peak its carbon dioxide emissions by the end of this decade and to reach net zero by 2060.

Before the launch of the nationwide program, similar markets were trialed in a few regions, including the Jing-Jin-Ji region which includes Beijing, Tianjin and Hebei province.