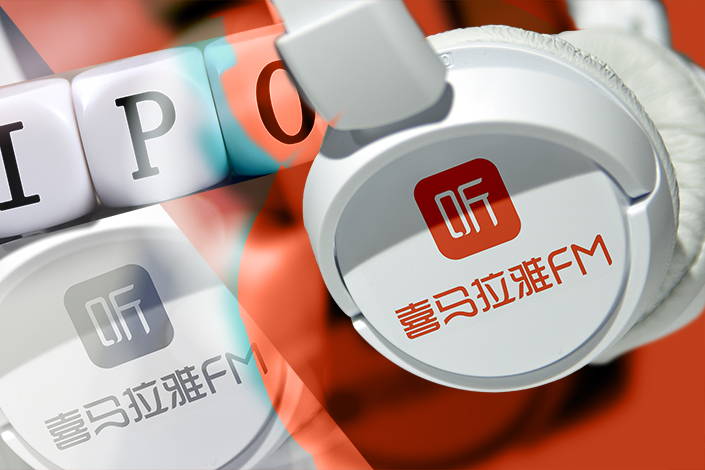 China’s largest podcast and audio app operator Ximalaya Inc., which is seeking an initial public offering in Hong Kong, has warned prospective investors that it could fall foul of online publishing laws if regulators intensify their crackdown on content providers, threatening to scuttle parts of its business in a fast-growing industry.

The Tencent-backed company, which provides audiobooks, podcasts and audio livestreaming via its platform, has not obtained an online publishing service license, which is required by the broadcasting regulator for internet operators to distribute publications, and could be penalized, according to its IPO prospectus filed to the Hong Kong Stock Exchange on Monday.

Ximalaya said its subsidiary, Shenzhen Tianbo Internet Media Co. Ltd., holds an audio-visual license that could cover Ximalaya’s “current business to certain, but not all, extent” and it was currently in the process of renewing the license.

“If the relevant PRC government authority decides that we are operating without the proper license, we may be subject to penalties such as shutting down our platform, deletion of all relevant online publications, confiscation of income and major equipment and special tools relating to audio content operation, fines or other penalties,” the filing said.

The disclosure illustrates how China’s online platforms — which have been operating in a state of regulatory limbo, often with tacit government approval — could find themselves vulnerable amid regulators’ newfound zeal.

Moves to tighten the crackdown could jeopardize the business of Ximalaya ahead of its listing and its main rival Lizhi Inc. as they work to carve out a share of China’s online audio industry, which is forecast to triple to 54.3 billion yuan ($8.4 billion) in 2022 from 17.6 billion yuan in 2019, according to data from iResearch.

Yet, although China is the world’s largest online audio market in terms of number of users, its online audio monthly active users (MAUs) only counted for 16.1% of the country's total mobile internet users in 2020, far lower than the figure in the U.S., which stands at 47%, said Ximalaya, citing figures from China Insights Consultancy. This indicates plenty of room for growth.

Ximalaya and Lizhi, among other audio-based apps, were removed from Apple’s App Store and Android equivalents in June 2019, during a crackdown by the Cyberspace Administration of China in relation with illegal content. They were returned a month later.

The law that concerns Ximalaya is the Online Publishing Regulations (网络出版服务管理规定), which was issued by the National Radio and Television Administration and the Ministry of Industry and Information Technology and went into effect in March 2016.

According to the regulations (link in Chinese), online publications include original digital works such as text, pictures, games, audio and video readings in the literary, artistic and scientific area, as well as digitized works whose content is identical to already published books, newspapers, periodicals, audiovisual works and electronic publications.

A partner at a Beijing law firm who is also an expert in cybersecurity regulations told Caixin the licensing issue would only be a problem if regulators were to strictly enforce the rule. The person asked not to be named because they were commenting on a specific company.

“The audiobooks on Ximalaya are indeed online publications covered by the Online Publishing Regulations, but the company has done due diligence by issuing a response in its prospectus and disclosing the associated risks,” the lawyer said.

Ximalaya isn’t alone. When Lizhi filed for its New York IPO in January 2020, the company also disclosed in its updated prospectus that it could be required to obtain an online publishing service license for its podcasts uploaded by hosts and risked penalties for not having one.

Such licenses are hard to get in China, which has some of the strictest content controls in the world.

Wei Wuhui, an IT commentator and lecturer at Shanghai Jiao Tong University, and Wei Yongzheng, a Chinese media law expert, wrote in a 2016 opinion piece published in Caixin (link in Chinese) when the Online Publishing Regulations was first released that obtaining a publishing license is no easy task.

“Even if all conditions are met, a permit is never guaranteed,” they wrote.

As of the end of December 2020, Lizhi still had not obtained the license, but said it had been allowed to register on the National Internet Audio-visual Programs Registration and Management System (全国网络视听平台信息登记管理系统), according to its annual report.

Such registration in practice has been recognized by the broadcast regulator as “an alternative approach for companies to operate in online visual-audio business without the said online publishing service license,” it said.

Many online audio and video platforms have yet to obtain all the required business qualifications, but have been operating and growing their businesses as normal, said the Beijing lawyer.

“That being said, if authorities were to tighten enforcement on these rules, the actual risks faced by companies will increase significantly,” he said.

Both Ximalaya and Lizhi declined to comment when contacted by Caixin.

Established in 2012, Ximalaya is the largest online audio platform in China in terms of total mobile listening time and total online audio revenues. The platform had more than 262 million MAUs at the end of June this year, and 5.2 million content producers shared their work on Ximalaya in 2020, according to the filing.

The decision to float its shares in Hong Kong comes after the Tencent-backed firm shelved plans to go public in the U.S. amid a Chinese regulatory tightening on overseas listings as the government fretted over security of cross-border data flows.

Ximalaya is yet to turn a profit, even as its revenue has grown. In the first half of 2021, the company lost 324 million yuan, an increase of 16 million from the same period a year ago, while revenue grew 56% to 2.5 billion yuan.

Its key revenue streams are membership subscriptions and paid on-demand listening services, advertising and livestreaming, which is monetized through virtual gifts sales. In 2020, 49.2% of its total revenue came from subscriptions. Advertising made up 26.3% while livestreaming accounted for 17.6% of its annual revenue.

The company said it could remain unprofitable in the future due to continued investments in content, technology, sales and marketing initiatives.

Xiamalaya did not disclose how much it hopes to raise in the IPO or the number of shares it will issue, but said it will use the funds raised for content expansion, technical capabilities, marketing, investments and acquisitions. Goldman Sachs, Morgan Stanley and China International Capital Corp. Ltd. are acting as joint sponsors.